The Anglia Ruskin University awards were presented to the stars during ceremonies at Peterborough Cathedral yesterday afternoon and evening.

Louis Smith, who is from Peterborough and trains at Huntingdon Gymnastics Club, was made Honorary Doctor of Health Sciences for his services to British sport.

Louis was one of the stars of London 2012, winning a silver in the Pommel Horse and bronze in the team gymnastics event.

He also had a bronze medal from the pommel horse event in 2008 in Beijing.

Louis told Heart: "It's an unbelievable thing to be presented with this award.

For the last two years, I've been doing things I never thought I could.

Obviously I was at the Olympics, then Strictly Come Dancing, then I got an MBE, and now this.

It's been a fantastic couple of years for me and I'm enjoying myself." 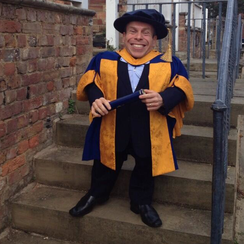 Meanwhile Warwick Davis, the actor from Yaxley in Peterborough, was presented with an Honorary Doctor of Arts award.

It was for his services to drama, and also his work to change the way short people are represented in film and television.

After the ceremony, Warwick said: "I've never really achieved particularly academically in the past.

This is just a lovely thing - to be honoured for something I love doing, being a performer and an actor.

It was the most beautiful ceremony, I love the formality, it was a lovely, lovely occasion.