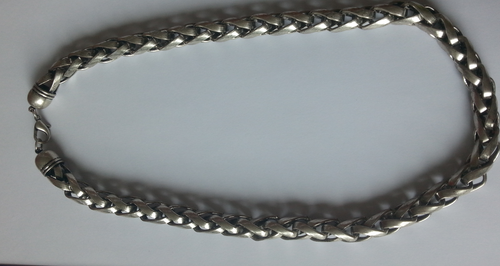 Police investigating a murder in Peterborough are trying to locate a neck chain that the victim is believed to have been wearing.

The body of 23 year old Michael Green was discovered in an underpass in Tysedale, in the Bretton area of the city, in the early hours of Wednesday May 28th.

Detectives believe he was wearing a silver neck chain, similar to the one pictured, in the hours leading up to his death.

However it was not on his body when it was discovered.

Police believe it may have been thrown away nearby at the time.

Detective Inspector Tim Redfearn, who is leading the investigation, said: "We believe Michael was wearing the neck chain on the night he was killed and we are very keen to find it.

It is possible the chain may have been discarded in the local area, so I would ask people to check their gardens or bins.

I would urge anyone who has seen the chain, been offered it for sale or know of its whereabouts, to call police."

A post-mortem examination found that Michael Green died from head injuries consistent with an assault.

Four teenagers, including three boys and a girl, have been arrested and charged with murder.

A 22 year old man has been arrested and charged with assisting an offender.

Anyone with any information is asked to call the Bedfordshire, Cambridgeshire and Hertfordshire Major Crime Unit on 01480 422791, via 101 or Crimestoppers, anonymously, on 0800 555111.