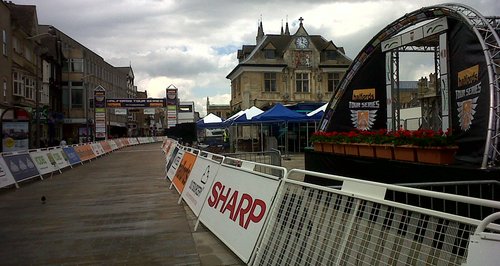 The circuit that top-class cyclists will take around Peterborough later this month has been confirmed.

A stage of the Tour series, Britain's leading men's cycle race, starts and finishes in Cathedral Square on Tuesday 20th May.

Thousands of people are expected to flock to the city centre for the racing, which begins at 5.30pm with the women's race.

This will be followed by the men's race.

Both races will see top-class riders competing on a 1.1 kilometre circuit at speeds reaching more than 30mph.

Annette Joyce, Head of Commercial Operations for Peterborough City Council, said: "There is genuine excitement in the city about the return of the Pearl Izumi Tour Series and the chance to watch world-class cycling.

The event creates an amazing atmosphere as thousands of people flock to the city centre to watch the races.

It's also a great opportunity to showcase what Peterborough has to offer and promote the city to a national audience.

In addition, it provides a boost for the local economy with more people than usual visiting the city to shop or enjoy a bite to eat.

The series is also a fantastic opportunity to raise interest in cycling and the benefits of keeping fit and healthy to improve our wellbeing.

We are grateful to the Travelchoice team for providing the money to host both the men’s and women’s races and for the opportunity for local organisations to use the course for their own competitions before the main event."

Click here to get exact timings for the event in Peterborough on Tuesday 20th May.