A man has been jailed for 16 years, for the rape and manslaughter of a woman who was found dead in a hotel in Wisbech.

He had previously been found guilty of manslaughter and rape following a 14 day trial.

He was cleared of murder.

Cambridgeshire Police say he 'violently raped' 49 year old Virginija Jurkiene at the Hare and Hounds Hotel in North Brink, Wisbech, back in January.

Doblys met Miss Jurkiene, from Oakroyd Crescent in Wisbech, after she placed an advert in a Lithuanian magazine 'seeking a friend for a serious relationship'.

The pair arranged to meet on Friday, January 18, and spent the evening drinking before they tried to check into a hotel.

They booked into the Hare and Hounds Hotel, then left to buy alcohol and food from a local shop before returning to the hotel.

At around 11.45am the following morning, Doblys told reception staff that Ms Jurkiene was dead in the room.

Police and ambulance were called and Doblys was arrested.

A post mortem revealed she had died from suffocation in conjunction with severe alcohol intoxication. 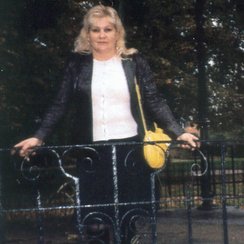 He was jailed for 16 years with a four year extension on release.

Detective Inspector Richard Wall said: "This was a particularly nasty case where the victim was subjected to an horrific sexual assault which may have taken place when she was semi-conscious or unconscious.

I hope this result will provide Virginija's family with some comfort that justice has been done and my thoughts remain with them at this time.

While cases like this are extremely rare in Cambridgeshire, one case is one too many."

The below statement is from the family of Virginija Jurkiene:

"In January we experienced something in our life.

It was such terrible pain which was spreading from our hearts up to our throat.

Nothing is the same now. This tragedy has shaken our lives enormously. We experience sleepless nights, nightmares and the most horrible thoughts of the suffering mum went through.

Those thoughts won't leave us alone. We just want to know why he was so cruel to our mum.

We miss her endlessly. Our hearts break every time we think about her leaving us in such a tragic way and how much she suffered.

These words are a goodbye to her.

The dearest, the most loved mum."