A woman has pleaded guilty to murdering three men before dumping their bodies in ditches, just outside of Peterborough.

The 30-year-old also pleaded guilty at the Old Bailey to the attempted murders of another two men, Robin Bereza and John Rogers.

Her barrister, Nigel Lickley QC, said: "The course of the arraignment is not one we had anticipated.''

Dennehy, who appeared in the dock in a white shirt with a star tattooed under her right eye, told the judge, Mr Justice Sweeney: "I've pleaded guilty, and that's that.''

She also admitted "preventing the lawful and decent burial'' of all three murder victims. 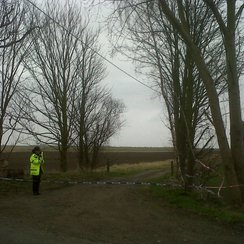 The serial killer, who was flanked in the dock by security guards, appeared alongside her boyfriend Gary Richards, who denied three charges of preventing burial and the two attempted murders.

Bald-headed Richards, who is 7ft 3in tall, is also known as Gary Stretch.

Dennehy was caught after a manhunt, during which police distributed her picture and described her distinctive tattoo.

Two other defendants appeared at the hearing by videolink.

Leslie Layton, 36, of Bifield, Orton Goldhay, pleaded not guilty to perverting the course of justice at an earlier hearing, while Robert Moore, 55, of Belvoir Way, Peterborough, denied assisting an offender.

They urged members of the public not to approach her and described her as having "a very distinctive green tattoo on her right cheek, beneath her eye''.

She lived in the Peterborough area at around the times of the killings.

He died from stab wounds to the chest.

They were found at nearby Thorney Dyke on April 3.