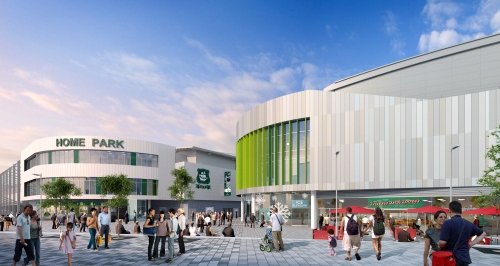 All going well, the 50 million pound transformation could see construction work get underway as soon as this Autumn .

Subject to planning consent being granted, the Akkeron Group, who's Chairman James Brent is also the owner of Plymouth Argyle FC, hopes to turn Home Park into a top class regional sporting and leisure destination.

The significant milestone comes after weeks of public consultation on the proposals by the applicant (Akkeron Group).

Key features of the plan include:

James Brent, Chairman of Plymouth Argyle and Akkeron Group, said: “We have been very encouraged by the level of interest, support and constructive feedback received from local people about our proposals.''

“The views and suggestions we have received from the community have influenced and shaped key aspects of our proposals including theHomeParkgrandstand, improvements toCentral Park, parking facilities and what the competition ice skaters in the city would like from their new arena.''

“We believe this plan will reinvigorate Higher Home Park and greatly improve the offer for local people and visitors of all ages with a range of indoor and outdoor sporting, leisure and social activities. We have also designed with Plymouth City Council and local interest groups, including the Friends of Central Park, a significant package of enhancements for the park environment and public amenities.”

Improvements proposed for Central Park include: