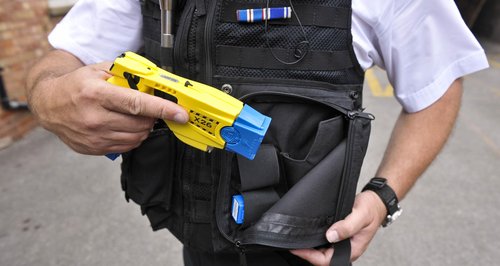 A teenage boy with complex learning difficulties has been Tasered by police in the grounds of a special school in Devon.

Devon and Cornwall Police were called to Chelfham Senior School near Plymouth, which specialises in children with learning difficulties including behavioural, emotional and social difficulties and autism, after reports of an alleged assault on a teacher.

The force confirmed officers deployed a Taser during the incident at 9.20pm on December 1, which involved three boys, a 15-year-old and two 14-year-olds, after reports that knives were brandished at officers.

The day and residential school for boys and girls aged seven to 19 is owned by the Priory Group, a private company known for its addiction clinics favoured by celebrities.

It is in the village of Bere Alston in the Devon countryside, close to Dartmoor National Park.

The Independent Police Complaints Commission (IPCC) has not been contacted in relation to the incident at Chelfham.

The alleged victim was treated at the scene by paramedics for chest and head injuries before being taken to Derriford Hospital.

All three boys involved in the incident were jointly charged with affray and will appear at Plymouth Magistrates' Court on December 20.