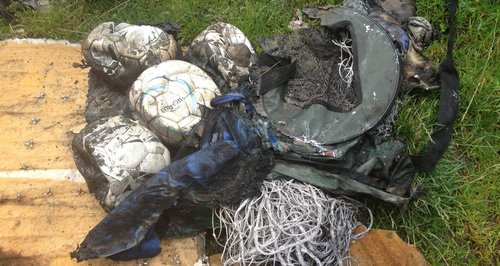 The incident at the Hoskins Park ground, left a storage container completely gutted and everything inside burnt or blackened by smoke.

The volunteer-run club caters for players of all aged, from the age of four up to under 18s and beyond, with about 170 children taking part in regular training sessions and matches.

The club is run entirely by volunteers and say the attack has had a devastating effect on its preparations for the new season less than two weeks away.

If you can help Chaddlewood Miners by replacing or sponsoring the purchase of new equipment or a replacement storage building, contact the Matt Matthews on 07790 350307 or Teresa Hill on 07535 093409.

Anyone who saw any suspicious individuals or vehicles around the club at the time of the fire is asked to contact police on 101, quoting crime reference CR/098841/14.