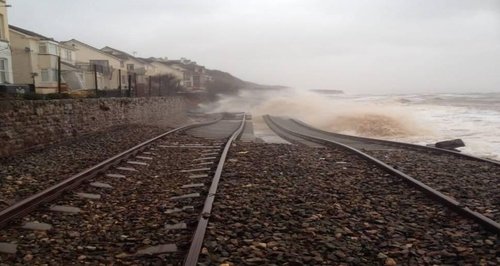 A fast and resilient 21st Century rail network for Devon and Cornwall must be a priority.

We are being asked to write to our MPs to send a clear message to Westminster.

In a 'Motion to Council' on 24 February, Plymouth Councillor Tudor Evans is asking Full Council to back calls to the Prime Minister to get on with the study into additional rail routes to serve the South West Peninsula.

The motion, which is being seconded by Councillor Ian Bowyer, shadow leader for Plymouth City Council, recognises the inadequacies of the South West peninsula rail network highlighted by the recent extreme weather

The network is not fit for purpose for Plymouth as the 15th largest city in England with an ambitious growth agenda, the motion notes and calls for more commitment from the Government to act on the outcome of the rail study they have already promised and to deliver an additional route (known as the Dawlish Avoiding Line or GW2) to serve Plymouth, Torbay and Cornwall, west of Exeter.

This Council resolves to:

It's as new photos taken by the Devon & Cornwall police force helicopter show how work is progressing on the line.

Network Rail say more bad weather means the line will take 6-8 weeks to prepare and is likely to go past the March 18th deadline.