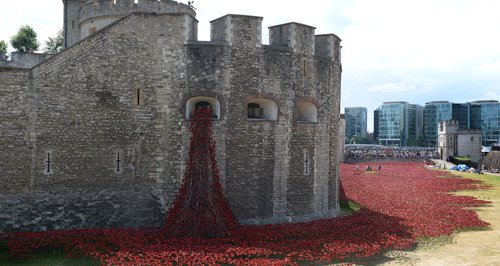 To mark the centenary, an installation of ceramic poppies will be unveiled at the Tower Of London on 5 August, 100 years to the day since the first full day of Britain's involvement in the First World War.

The evolving installation by artist Paul Cummins will gradually fill the moat with 888,246 ceramic poppies, each poppy representing a British military fatality during the war.

The idea was inspired by a war poem by an anonymous soldier 'The Blood Swept Lands and Seas of Red'.

Theatre Royal Plymouth's TR2 workshops were commissioned to build the steel structures that form an integral part of this installation, creating a dramatic visual framework for the poppies as they gradually surround the medieval fortress.

The steel constructions, with attached poppies, were completed by the team at TR2 earlier this month and then transported from Plymouth to the Tower of London, with all the poppies carefully covered to ensure they weren't spotted before they were revealed at the Tower.

A team from TR2 put the structure in place in the early hours of the morning, in time for the first visitors at the Tower to catch an early glimpse of the installation.

More than 8,000 volunteers from across the UK will be planting the clay poppies in the moat throughout the summer.

All net proceeds - hoped to amount to millions of pounds - will be shared equally between six service charities.

The final poppy will be symbolically planted on 11 November 2014.