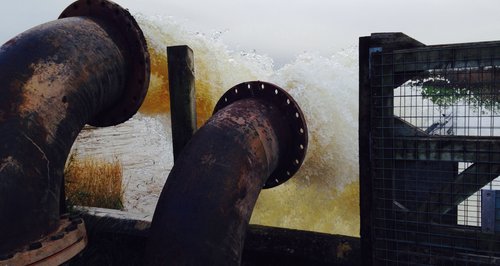 A new plan to deal with a flood-hit area of south-west England will be drawn up within six weeks, Environment Secretary Owen Paterson announced as he was confronted by residents angry about the perceived lack of action from officials to tackle the problem.

On a visit to Somerset Mr Paterson acknowledged that there was legitimate anger felt among politicians, farmers and residents on the Somerset Levels, who have claimed the lack of dredging of local rivers by the Environment Agency has exacerbated the problems they have faced.

Mr Paterson said the Environment Agency and local councils would produce a new plan, which would "almost certainly'' involve a project to clear the Parrett and Tone rivers. He acknowledged that national guidelines on dredging were not appropriate for the Somerset Levels, large parts of which are below sea level.

Mr Paterson said he understood the strength of feeling in the area:

However the Stop The Floods Campaign issued a statement saying:

'The reaction of Owen Paterson to his visit to Somerset is frankly staggering. It is hard to grasp which bit of the puzzle he does not understand. He has seen the suffering of Somerset residents at first hand. He has seen the petition signed by over 4,000 of us calling for the rivers to be dredged. What is there to not understand? He knows that this is not a natural floodplain, it is man-made. He knows that this landscape was successfully managed for 800 years and has only suffered because of neglect over the last 20. These floods have not been the result of bad weather. They are the result of bad policy. If Owen Paterson thinks the taxpayers of Somerset are going to settle for being treated like third class citizens then he will be disappointed. Our campaign will continue until our politicians show leadership and until we get fair treatment and that means the rivers are not only dredged but properly maintained into the future. Because this is a man-made landscape we believe the EA may well be in breach of legal obligations to maintain it. We will now consider if there is the possibility of mounting a substantial legal challenge to the EA the body responsible for the neglect of our rivers.'

Bridgwater and West Somerset MP Ian Liddell-Grainger criticised the Environment Agency over the lack of dredging on the river system. He said:

"Once it's dredged we can then maintain it but the Environment Agency has to stop this mucking around and get on with it. It is an absolutely ridiculous excuse. This never flooded to this level ever in living memory, and we've got people who have been here for a long time. If you look back into the mists of time you don't have this.

What galls my constituents... is they found £31 million to build a bird sanctuary at the mouth of the Parrett river, yet they cannot and will not find #5 million to dredge this river.''

But David Cameron defended the agency, saying it had done "excellent work on helping to deal with the flooding and helping with communities. Obviously the Environment Agency has to listen to these concerns - you do get quite widespread concerns that river levels have risen. We have got to address those and give some clear answers.''

On a visit to Northmoor Green, Mr Paterson set out the new measures:

"I had a very constructive meeting this morning with the local councils and the Environment Agency. What I have asked them to do is come up with a very clear action plan within six weeks. That will almost certainly involve a project to clear the Parrett and the Tone.

But then long term look to see how, with partnership funding, local agencies such as the internal drainage boards, the county council, the four district councils can work together - and with the NGOs, people like the RSPB and the Wildlife Trusts, who play a real role in this - to see how we can hold water back further up in the hills, how we can do more with sustainable urban drainage systems (Suds), get more water soaked into the ground before it gets into the river systems and also long-term planting.''

Another option being considered was a sluice near Bridgwater to keep the sea tides out of the river network on the Levels. He said: "All that together is a long-term serious plan which I hope will give us satisfactory results here over the next 20 years.''

On the decision to stop regular dredging of the Parrett and the Tone, Mr Paterson said:

"Quite clearly the national guidelines do not appear to me to be appropriate for this very particular part of England, where you have got about 100 square miles well below sea level, which was cleared by the Dutch way back under Charles I and where very active management of the waterways is required.

But once it's in the waterways, emphatically, I'm quite clear that the current guidelines are inappropriate for an area like the levels.''

Leader of Somerset County Council, John Osman has announced his “disappointment” following news that there will be no immediate extra funding to protect flood-hit communities in Somerset. However, there was some hope for those communities as Environment Secretary, Owen Paterson announced an action plan for the next 20 years to protect the levels and moors.

“Although I am hugely disappointed that Central Government have not announced any additional funding we will continue to keep the pressure on to secure a fair deal for Somerset’s residents. We are happy to work with Government and other agencies to draw up a long-term plan to protect our communities against flooding but I want to be clear that this is not the end of our fight to lobby Government to support our flood-hit communities”.

Leader of Taunton Deane Borough Council, Cllr John, Williams is welcoming the intention to formulate a long term action plan to address severe flooding on the Somerset Levels. Cllr Williams said that although no immediate Government funding would be available, Environment Secretary Owen Paterson’s visit to badly affected areas on the Levels shows the situation is now firmly on the national agenda.

Vast swathes of the Levels and Moors are under water with the floods unlikely to abate quickly. Taunton Deane Borough Council is working closely with other local authorities, including Somerset County Council and neighbouring Sedgemoor and South Somerset District Councils, plus the emergency services.

Crisis plans are in place and senior officers are in constant daily contact with their counterparts to ensure help can be provided to those most affected by the flooding. Cllr Williams said:

“We are dealing with unprecedented weather – so this needs unprecedented action from both the Environment Agency and the Government.

The problem we are facing now is the depth and duration of the flooding. This has only happened since regular dredging of the two main rivers – the Tone and the Parrett – ceased. Dredging is not the sole answer to the issue but there does appear to be a direct link so needs addressing urgently.

We need to jointly press, with the county council and other districts, for action, not further talking or reports.”

The Met Office said the counties of Hampshire, Dorset and Somerset remain at medium risk of flooding as another day of rain hits the regions. Meanwhile, snow will fall across high ground throughout the UK, particularly across Wales, Scotland and northern England, with some hail storms and thunder predicted.

Temperatures will fall to around freezing, resulting in a risk of icy stretches on roads and the potential for travel disruption, the Met Office added.

The Environment Agency has issued more than 140 flood alerts and 10 more serious flood warnings in the south west, which mean flooding is expected and immediate action is required.