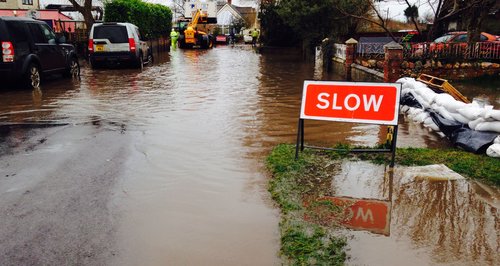 “A big step forward, bringing hope to our flood-hit communities” – that’s the verdict of Somerset County Council after the much heralded 20 year Flood Action Plan was formally unveiled today.

The Plan sets out targets and aims to prevent the same level of flooding hitting Somerset’s levels and moors that has been suffered over recent months.

'We have worked together to find solutions in the short, medium and long term.

'The Plan contains some firm ideas for what we can do now, but also some broad ambitions such as a sluice or barrage for the River Parrett and long term projects to prevent water entering the area in the first place.

'We listened to local people in drawing up the plan and we will spend a lot of time now talking and listening to them again to ensure the plan is fit for purpose and supported by local people.

'I am particularly pleased that the Department for Transport have made such a significant contribution, we are very grateful.'

Among the first to see the Plan was the Flooding on the Levels Action Group (FLAG). Chairman Heather Venn said the group was “cautiously optimistic”.

'We need to keep a careful eye on this, and it is absolutely crucial that the funding is there, but it is a very positive first step and we welcome much that is in it.'

The Plan can be found on the council website www.somersetnewsroom.com. It contains a number of commitments such as dredging around five miles of the River Parrett, and repairing damaged riverbanks.

The plan also contains a number of ambitions that would require significant further funding. The £10.5m government investment comes on top of the £10m previously announced by the Prime Minister.

A further £1.5m has already been raised towards dredging and other flood prevention measures across Somerset authorities and partners.

First proposals have been revealed on how Somerset County Council will use a £10m grant from Government to tackle flooding issues on our roads.

The grant was announced by the Department for Transport at the same time as full details of the much heralded 20 year Flood Action Plan were announced.

'We will work with our partners to assess how best to invest this funding to best serve our families, communities and businesses.'

The funding for the roads could see a series of projects get underway including:

And a further major project could get underway which would see adaptions to the A372 near Langport to accomodate a larger channel for the Sowy, expected by the end of the year.

The funding will also help Somerset County Council undertake a number of transport studies to improve the resilience of the A361 and other road schemes including raising sections of an essential road link into the community Muchelney.

Meanwhile, the humanitarian boat service operating between Langport and Muchelney will be replaced by an all-terrain vehicle. Flood water in the area has receded enough to allow the fully tracked BV206 vehicle to replace the boat service and will continue to provide a lifeline for stranded residents.

“We are replacing the humanitarian boat service with an all terrain vehicle to continue providing the residents of Muchelney with vital transportation through the flood water - the timings of the service will remain unchanged. The flood waters are receding which is good news but there could be hidden dangers under the surface so don’t please don’t attempt to drive through floodwater until it is safe to do and the roads have reopened.”