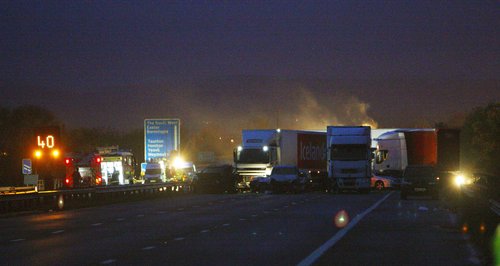 Drivers say they hit a "wall of blackness'' that smelt like firework smoke moments before a fatal pile-up on a motorway in Somerset.

Seven people died and 51 were injured when 34 cars collided as a section of the M5 was suddenly "engulfed in thick smog''.

Bristol Crown Court heard that the smog built up during and after a fireworks display at Taunton Rugby Club and drifted across the road. Collisions began just six minutes after the £3,000 display, organised by 51-year-old Geoffrey Counsell, which involved 1,500 shots in 15 minutes. Counsell, of Ashill in Somerset, is charged with breaching health and safety regulations by failing to ensure the safety of others, which he denies.

Stephen Crowle was driving from Plymouth in Devon to Gloucestershire with his wife Susan on the evening of the tragedy, November 4, 2011. The couple stopped at Taunton Deane services just after 8pm and rejoined the motorway at around 8.20pm, Mr Crowle told the jury:

"We suddenly hit what I consider almost like a black wall. Visibility dropped dramatically, certainly from almost 200 feet, 200 metres or so, to virtually nothing. Thankfully there was very little traffic around. Instinctively, when you are hit with no visibility you brake.
It was smoke. It was very dark, it was black. After six or seven seconds the road just cleared and that was it really.''

Mrs Crowle, a front-seat passenger in the Nissan Qashqai, also told the jury:

"As we passed the junction we suddenly, it was very, very suddenly, came into a wall of blackness. It was very dense, we couldn't see anything. It was obviously very frightening.''

The patch lasted several seconds and then suddenly cleared, said Mrs Crowle who told the jury she had been using that stretch of the M5 since 1975.

"As we carried on out of the blackness, I put my window down. It was like the after-smell of fireworks and smoke,'' she said.

"My reaction was we were lucky we didn't hit anything but there wasn't anything close to us.''

Philip Smith was driving his Peugeot 306 from Plymouth to Windsor with his son-in-law, wife, daughter and granddaughter. He said:

"The weather was clear. Suddenly I drove into what I would describe as a mix of smoke and fog that was black in colour. It came out of nowhere. It was so thick. It was like something out of a movie. It was like you were in a bright room and someone turned the lights off. I have never experienced anything like it. It happened so quickly it caused me to brake quite hard.
Visibility was at zero. It was absolutely black. I couldn't see the bonnet of my car. It was quite scary. It was the worst thing I have driven through.''

Motorists and passengers involved in a series of collisions on the motorway gave harrowing accounts to the jury. They described blackness hitting their vehicles "like a blanket'' before feeling numerous impacts - akin to being in a "pinball machine''.

A statement read from one driver, named only as Mr Kingsland to the jury, said he was travelling along the motorway in his silver Ford Galaxy car:

"Within a fraction of a second, it seemed my windscreen went completely white, as if a blanket had been thrown over it. I was completely taken by surprise. The first thing I noticed was three brake lights illuminated in front of me. I immediately thought I was going to hit the vehicle in front so braked as hard as I could, it was a full emergency brake situation.
I can't remember what happened next apart from to say I was hit at least four to five times from the side to the rear. At this point I thought the next was going to kill me and felt very vulnerable. I would liken it to being in a pinball machine.''

In another statement, Peter Morgan, said conditions were fine on the motorway until his BMW X5 suddenly hit "black smoke''. He said:

"My vehicle seemed to be completely enveloped. I had no view out of the front, sides or rear out the windows. I then saw the large tail lights of a lorry only a few metres in front of me. I then braked very hard and managed to bring the car to a halt, about 10 feet behind the trailer.

I remember thinking 'God, I am stopped on the motorway in thick fog, I need to move'. I then felt an impact to the rear offside of my vehicle.''

Richard Thorne, an articulated lorry driver for Langdon Transport with 20 years of experience, had been lying down in the bunk of the lorry while colleague Perry Mead drove. He told the jury he first felt the brakes being applied "really, really hard'' - leaving him clinging on to the seat in front of the bunk. He said:

Mr Thorne said he jumped into the front seat as soon as the lorry came to a halt. "As soon as I sat down, we got hit really hard by another truck,'' he said.

Michelle Craker was driving her white Renault Traffic van from Devon to Gloucestershire to visit her parents for an anniversary celebration.
Mrs Craker told the jury:

"I remember thinking 'it is a lovely evening', it was quiet, it was the perfect time to travel.''

Mrs Craker, who was driving with her young son and husband, said the vehicle hit a patch of white mist as it entered the M5 at junction 25. She said the fog was not severe enough to warrant braking and she simply took her foot off the accelerator to pass through it. Mrs Craker said:

"The fog got slowly thicker but it was still white. Then the car went into dark fog or dark smoke but I could still see red lights (of the car in front). It got thicker. I could just see the lights. Then they didn't go anywhere, they just went out. I braked. We didn't see anyone, we just hit whatever was in front of us. We got hit almost immediately, two seconds later, by something behind us after the airbags had gone off."

"It was literally like someone had thrown a bag over my head. It was clear, then it was definite fog, then it was a total blackout within a period of less than 30 seconds.''

The motorists said the smoke cleared relatively quickly after the collisions.

The trial is expected to last up to six weeks.