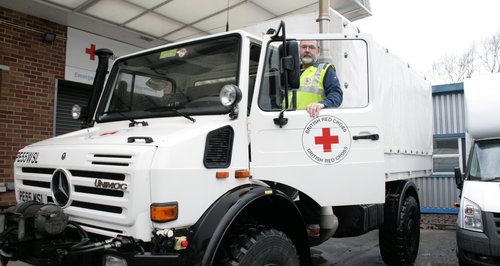 The British Red Cross is providing an emergency vehicle, usually used in disasters overseas, to aid the emergency services and local authorities in transporting urgent supplies to flood-stricken communities on the Somerset Levels.

The 7.5 tonne 4x4 vehicle, which is more commonly used to deliver international aid in mountainous or flooded terrain, has been sent from the charity’s international warehouse in Warmley, Bristol, to Martock, in Somerset. It will be used in conjunction with Devon & Somerset Fire and Rescue Service to transport large items through flood waters to cut-off residents.

Around 30 Red Cross volunteers are also on standby to provide support in the hours and days ahead and a team of two spent Sunday in Burrowbridge, Somerset, providing refreshments to emergency services teams checking on residents door-to-door.

Meanwhile Red Cross senior service manager Joanna Tennant has been based with the multi-agency response team over the weekend to coordinate volunteers in helping the communities keep safe and well. She says:

“The Unimog will be based at the fire station in Martock to offer a vehicle with a large enough clearance to be able to get through the flood water. Although the village of Muchelney is completely cut off by flood water there are other communities that are passable with the right vehicle so we decided now was the time to get the Unimog down here, so it’s ready to respond at a moment’s notice.

We anticipate the vehicle will be used by a team comprising staff from the fire service and the Red Cross. It could be transporting anything from oxygen cylinders to a patient who needs it to portaloos for communities where the water supply is cut off or contaminated. Supplies are also being taken into these communities by boat so the Unimog will be for those larger items.”

The Unimog is often associated with major international emergencies, such as flooding or natural disasters. The Red Cross used the same model in Indonesia during the Asian Tsunami in 2004. And it will be invaluable during the current severe weather crisis because it can work in incredibly difficult conditions and reach places other vehicles can't and can carry about two and a half tons of cargo.

“This tie-in between our international work and our work here in the UK is a great illustration of the fact that a crisis can happen anywhere, and to anyone. We want people to know that it’s not the scale of the crisis or where it happens that matters but the impact on the people affected, and that’s exactly why Red Cross volunteers are here to help.”