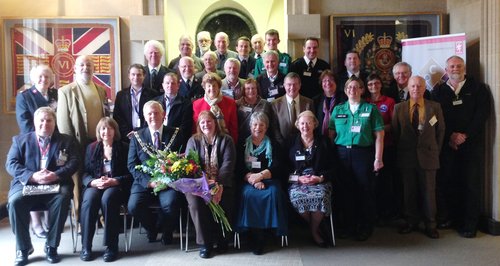 Twenty voluntary organisations who pulled out all the stops during Somerset’s unprecedented 82-day 2013-14 winter floods have been handed a long-awaited prestigious award.

Somerset Emergency Voluntary Agencies Group (SEVAG) discovered it was to receive the Emergency Planning Society Resilience Award 2014 for the Voluntary Sector in the autumn. Unfortunately no-one was able to attend the award ceremony in Birmingham to receive the honour.

Made up of 20 different agencies, spanning the British Red Cross to the Burnham Area Rescue Boat, the award recognises the significant contribution SEVAG made supporting the local response to the Somerset floods.

“The drive, tirelessness and expertise of the organisations that make up the Somerset Emergency Voluntary Agency Group has helped the county through some incredibly troubling times, and for that, we owe them a debt of gratitude.

They are a recognised and trusted group of volunteers who have become a fundamental part of our local response when the unexpected hits, and without them, we would be all the poorer.

I wish to give my sincere thanks to SEVAG for all the work put in by all 20 organisations, and I am extremely pleased to finally be able to present each with this long-deserved award.”

SEVAG is on permanent standby, ready to be called out by Somerset Local Authorities Civil Contingencies Partnership for County and District Services to help in response to, and recovery from, incidents as and when they are needed.

Among the tasks the group of organisations completed during the floods, were:

The Chairman also recognised the contribution made by Mrs Barbara Sparks RVS, who has been involved in emergency response since 1978. Mrs Sparks is stepping down as the lead of SEVAG and the Voluntary Agency representative on the Avon and Somerset Local Resilience Forum.

Somerset Emergency Voluntary Agencies Group (SEVAG) is made up of the following agencies: