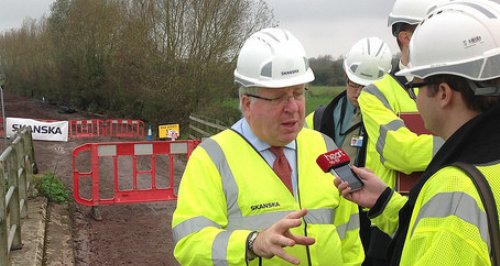 The Secretary of State for Transport has visited Somerset for a first-hand look at the road-raising scheme in Muchelney.

Patrick McLoughlin visited the Levels and Moors with Somerset County Council Leader John Osman to find out how some of the Department for Transport’s money is being spent to reduce the likelihood and impact of flooding.

At Muchelney he was able to see work underway to raise a 500m stretch of road by up to 127cm. This should retain road access to the village if there is a repeat of last winter’s flooding that left the village cut-off for a prolonged period.

The Secretary of State also saw the work well underway to install four new culverts at Beer Wall on the A372 which should stop the road flooding and allow water to be moved more quickly off the Levels. Both projects are being carried out as part of the multi-agency 20 Year Flood Action Plan.

The DfT has so far committed £26.3 million in total – £10m for the Flood Action Plan works, £12.3m for repairs to the County’s road network as a result of winter damage and nearly £4m for pothole repairs.

Cllr Osman, who is also the Chair of the Flood Action Plan Leaders Implementation Group, said:

“A lot of work has taken place since last winter’s flooding and it was a good opportunity to show the Secretary of State exactly what his department’s money is being used for – vital projects that will make a real difference for local communities. No one can promise that flooding won’t happen again, but schemes like this and the many other aspects of the action plan will reduce its likelihood, duration and impact.”

“Skanska is delighted to be delivering these schemes on behalf of Somerset County Council. As the council’s term highway maintenance contractor our teams were at the forefront of the flood response earlier this year and we know all too well the significant impact they had on our local communities.

“We are proud to be building these schemes and playing our part in improving the future management of the Levels and Moors. We look forward to working with the communities to try and minimise disruption as much as possible during the schemes.”

All the schemes are part of the Somerset Levels and Moors Flood Action Plan being delivered by a range of agencies, co-ordinated by the County Council. The plan will guide water and land management policies and investment on the Levels and Moors for the next 20 years.