D-Day 70: Commemorations In Normandy And Portsmouth 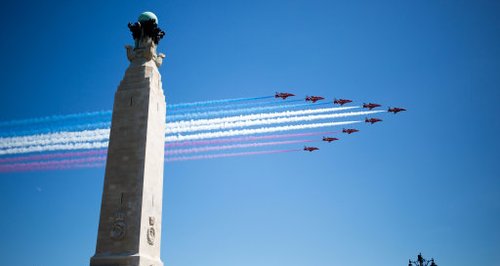 The sacrifices made by Allied troops who fought and died to free Europe from Nazi tyranny were honoured by leaders from across the world during an international ceremony of commemoration.

Staged on the very beach stormed by British troops on June 6, 1944, presidents, prime ministers and monarchs, including the Queen, watched a symbolic ceremony that marked the 70th anniversary of the D-Day landings.

The spectacle was the high point of many commemoration events this week which have seen thousands flock to beaches, cemeteries and villages linked to the Normandy landings.

It is likely to be the last major tribute to the sacrifices made by the elderly veterans who were in the stands watching, and their comrades who died fighting.

Among the heads of state who attended were US president Barack Obama, Russia's president Vladimir Putin, King Harald V of Norway and president Milos Zeman of the Czech Republic.

President Francois Hollande of France hosted the event and he sat with the Queen on his right. Further along the row was German chancellor Angela Merkel.

Seated directly behind the leading dignitaries were other national figures including the Duke of Edinburgh, and the Prince of Wales and Duchess of Cornwall.

In Portsmouth, a remembrance service will be held on Southsea Common just before 11am, then there will be a parade along the seafront past the D-Day museum.

Veterans and relatives will also gather in Bournemouth at 11am - there will be a wreath-laying ceremony at the War Memorial in the central gardens.

Last night, Prince Charles and Camilla laid a wreath at Pegasus Bridge in Ranville, the first village to be liberated, and a vigil was held.

Yesterday, the Princess Royal led tributes to the heroes who took part and the many who died in the D-Day landings at the main ceremony in the UK.

Anne, who is commodore in chief of the Royal Navy in the Portsmouth area, attended a drumhead service on the common, along with veterans and serving members of the armed forces. 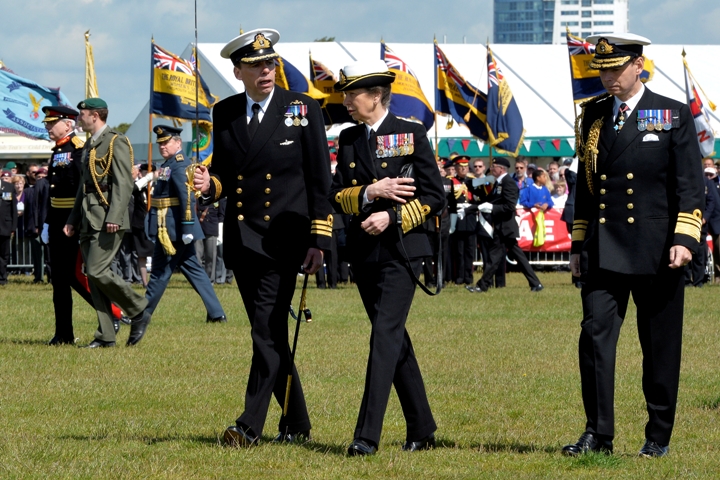 Portsmouth was the departure point for the troops heading to Sword Beach, the easternmost of the five beaches targeted in France.

More than 200 veterans and military personnel, including 80 Normandy veterans and representatives from the armed forces of the UK, Canada and France, attended the parade with a marching band which arrived at the common for the drumhead ceremony which involved prayers for those who lost their lives in the military operation.

During the ceremony, an Army cadet in the parade fainted and was supported by their colleagues.

In a message in the order of service, Anne wrote:

"I know the planning and achievement of Operation Overlord is a source of pride in this great city.

"People here are rightly proud of their contributions, and those of their parents and grandparents, to that daunting operation.

"The anniversary of June 6, 1944 will always be an emotional one, with memories of lost comrades, family members, and the large numbers killed in those first days following the Normandy landings.

"They had no idea what they were to face, or what the effect of their efforts would be, but as we now know, D-Day marked the beginning of the end of the Second World War.

"Here in Portsmouth we also remember the sacrifices made by the civilians in a city which had already been bombed but were ready to treat the injured who returned from war, repair vessels in the dockyard, or bring tea to troops as they waited to embark.

"Commemoration of D-Day is obviously important and people will remember it for many years to come but this year is particularly poignant because it will be one of the last milestones on which there will be sizeable numbers of veterans who were there on the day.

"We salute all those involved in Operation Overlord and 'We will remember them'.''

Following a rendition of the Last Post, a silence was held to remember those who died in the landings and the service concluded with the National Anthem sung by the hundreds of people who had gathered to watch the ceremony.

During the service, one of the standard bearers collapsed and was assisted by medical staff.

After the ceremony, Anne had a chance to meet and talk with many of the Normandy veterans. 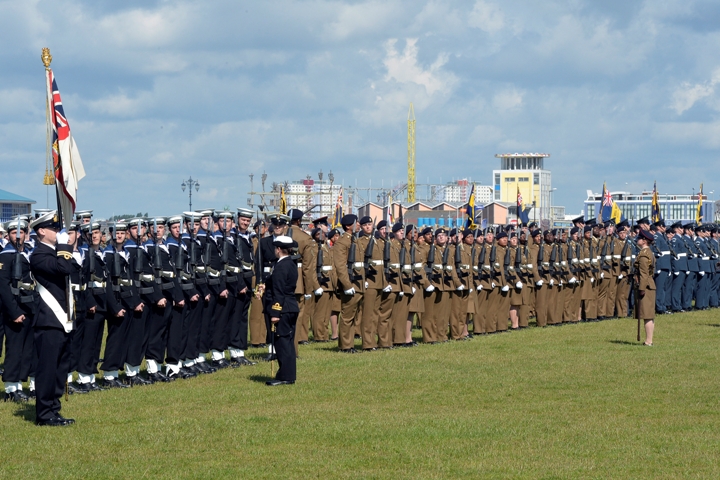 Matthew Guymer, 90, from Stafford but originally from Newcastle-upon-Tyne, who served as a major with the 11th Hussars (Prince Albert's Own), said: "I feel honoured and delighted and grateful to the people of Portsmouth for being so kind to us all.

"I think it's the last time I will be able to come down at my age. I am a very proud man and I am delighted to have the opportunity to meet the other veterans.''

Albert Lilly, 90, from Portsmouth, who served with the Royal Engineers, brought his grandson to the ceremony.

He said: "I think it is a great day. It is emotional for me, it's about paying our respects for those who died.''

He added that he felt it was important to pass on the message of what was achieved to the younger generation.

His grandson, Jack Metcalfe, 14, said: "It's a big event. I have always known about it but it's good to learn more.

"I am very proud of my grandfather and his generation and what they did for us.''

The service was followed by an amphibious landing display by the Royal Marines on Southsea Beach launching from HMS Bulwark, along with members of the Royal Netherlands Marines Corps from the Dutch vessel HNLMS Johan de Witt. 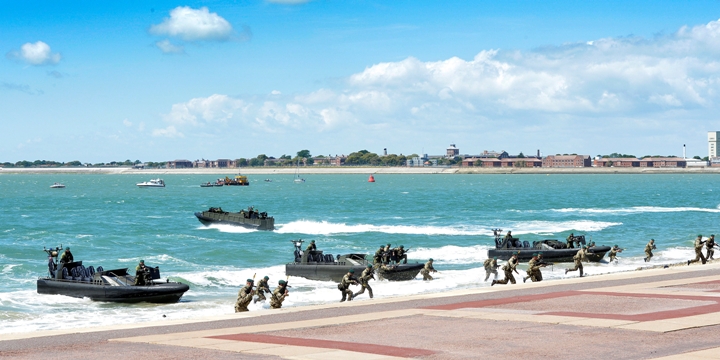 Two Sea King helicopters also landed on the common as part of the display. 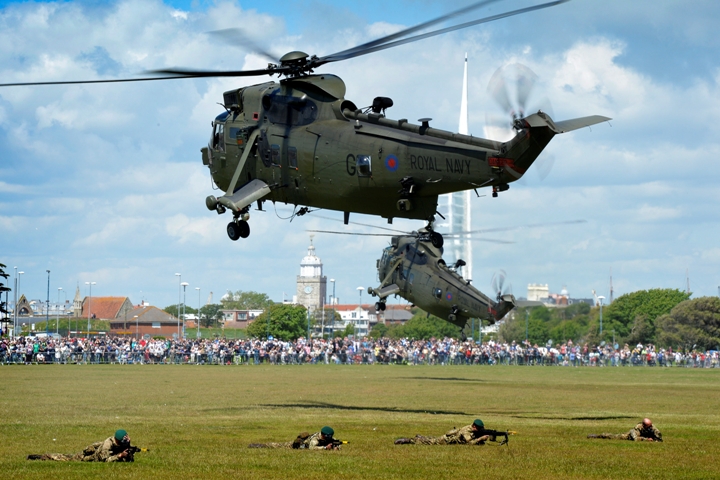 Antony Stott, 93, who served in the RAF, and landed on D-Day+1 at Juno, watched the display with his son, Peter Stott, 51, from Southsea.

Mr Stott Senior said: "It's been interesting. It was much less noisy today than it was back then.''

He explained that his role was to set up one of the first landing strips and he spent six to seven weeks in France.

He said: "It was a job that had to be done and I like to think we did it properly.''

His son said: "I am immensely proud of my dad. He's very modest but, while growing up, he would regale us with stories, but being here today makes it more real, especially for the younger generations coming through, particularly as it is possibly the last time the veterans will be able to gather like this.

"For me it's been an emotional day and it's right they are remembered in a respectful way.''

A display by the RAF's Red Arrows was also held over the Solent with thousands turning out to watch. 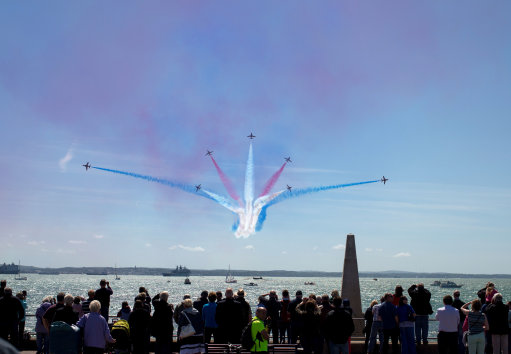 The festivities concluded later with a sail-past by a flotilla of Royal Navy and allied nation ships sailing from Portsmouth to the Normandy coast. The flotilla was led by HMS Bulwark, an amphibious assault and command ship which is currently the Royal Navy's flagship.

Other ships taking part in the sail-past were the Joan De Witt, FS Somme, a French replenishment tanker, BNS Crocus, a Belgian mine warfare vessel and RDN Sabotoren, a Danish coastal patrol craft.

At 7pm the Bournemouth Symphony Orchestra performed a free concert, where the veterans were guests of honour.