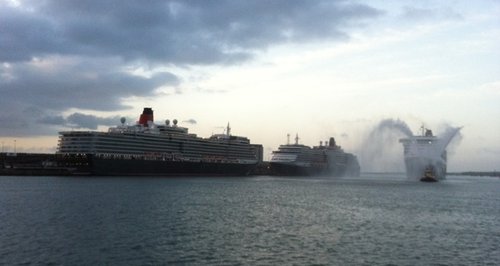 The Duke of Edinburgh has joined in celebrations in Southampton for the 10th anniversary of the luxury cruise liner, Queen Mary 2.

He shared a joke with crew members as he was given a behind-the-scenes tour of the luxury cruise liner Queen Mary 2 to mark its 10th anniversary.

The Queen Mary 2 was named by the Queen and Prince Philip in January 2004 when it became the flagship of the Cunard fleet.

The ship made a rare arrival at its home port of Southampton alongside its two sister ships the Queen Elizabeth and Queen Victoria making the Hampshire port the only place in the world to have hosted the "Three Queens'' three times.

The celebrations began with an early morning birthday salute on the ships' whistles and will end with a firework display at 10pm as the liners depart in convoy. 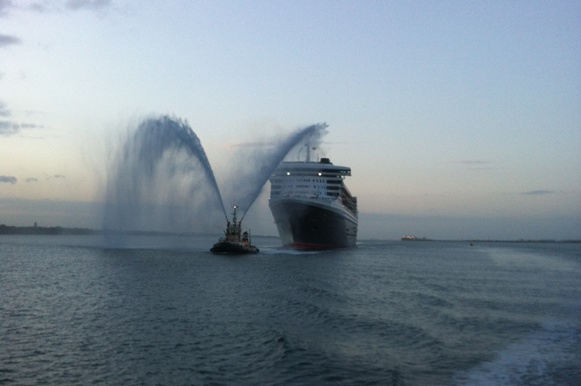 After arriving on board, the prince was given a tour of the staff quarters and works area of the ship including the laundry room and the crew gym and bar.

As he arrived at the bar, Prince Philip joked: "So here are all the alcoholics,'' which received laughter from the gathered officers and crew members.

He was also shown a photograph taken of the crew on the deck of the Queen Mary 2 in Sydney, Australia, by the ship's captain Kevin Oprey who asked the prince if he would like to sign it, only for him to respond: "But I'm not in it'' and he continued with his tour.

The staff had hoped that Prince Philip would sign the photo for it to go on display in the bar area.

After meeting a team of third officers, the crew's entry-level officers, who were from different parts of the British Isles including Scotland, Ireland and Tyneside, Prince Philip said to them: "You can all understand each other, can you?'' which was received with laughter.

The prince had been expected to sound the ship's whistle but when one of the officers asked him if "he would like to scare the local bird life?'' he responded "no'' and carried on his tour and signed the ship's visitor book.

Prince Philip then attended a reception held in the Queen's Room where he unveiled a new portrait of the ship by Robert Lloyd and stood for a formal photograph with the current and former captains of the ship. He then attended a private lunch before departing the ship. 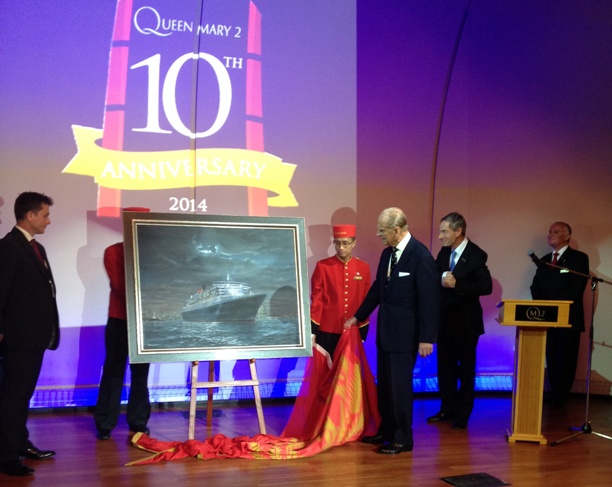 Angus Struthers, Cunard's marketing director, said: "We're delighted to have the Three Queens come together in our home port, Southampton, to mark the first 10 years of the grandest ocean liner ever built - Queen Mary 2.

"Southampton is where Queen Mary 2 was named by Her Majesty The Queen in 2004 and Southampton has been the main UK departure point for Cunard's crossings to New York since 1919.

"So it is fitting that it is in Southampton that we are celebrating the 10th anniversary of Queen Mary 2, which has become almost synonymous with Transatlantic voyages.''

Since 2004, Queen Mary 2 has undertaken a total of 419 voyages including over 200 Transatlantic crossings, called at 182 ports in 60 countries and carried more than 1.3 million guests.