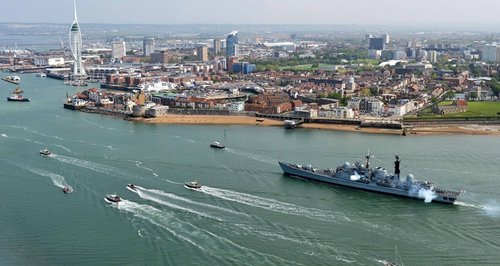 The last of the Royal Navy's fleet of Type 42 destroyers, HMS Edinburgh, has been formally decommissioned in Portsmouth.

The ship's White Ensign was lowered for the last time during the ceremony attended by hundreds of guests and veterans, ending an era which began with the launch of the first of type 42 HMS Sheffield in 1971.

The ageing Type 42s have gradually been phased out of service to make way for six successor Type 45s which are among the most modern and powerful warships in the world.

Among the guests at the decommissioning ceremony was Lady Heseltine - HMS Edinburgh's sponsor and wife of former Defence Secretary Michael Heseltine - who launched the ship on April 14 1983. Seventeen former Edinburgh Commanding Officers and dozens of Type 42 veterans also attended.

Edinburgh's 270 ship's company were on parade during the 50-minute ceremony and were inspected by Lady Heseltine and senior Naval officers.

RAF Typhoon and Hawk aircraft, together with a Sea Fury from the RN Historic Flight, performed a flypast before the final lowering of the ship's flag.

"It's a poignant day for all of us associated with HMS Edinburgh.

"It is also a day of celebration when we remember the 40 years of faithful service that 'The Fighting 42s' have given, manned by dedicated men and women, proud to serve in this world renowned class of ship.''

Built by Cammell Laird at Birkenhead, Edinburgh was commissioned in December 1985 - the 14th and final Type 42 to enter service.

Her first deployment was to the Arabian Gulf in 1987, escorting numerous merchant ships safely through the region.

The following year the Duke of York joined as one of the ship's officers, serving on board during a six-month round-the-world deployment.

She took part in the second Gulf War in 2003, supporting Royal Marines ashore and acting as escort to the helicopter carrier HMS Ocean.

The Type 42 air defence destroyers have been the backbone of the Royal Navy's fleet for nearly 40 years.

They have served on operations across the globe, including the Falklands conflict of 1982 where HMS Sheffield was sunk by an Exocet missile.

As recently as 2011, HMS Liverpool was ordered to Libya as part of the Navy's contribution to NATO's naval blockade of the country during its civil war.

She supported the no-fly zone by controlling NATO aircraft from the sea, enforced the embargo on arms sales to the Gaddafi regime, and fired 111 high-explosive rounds against targets ashore.