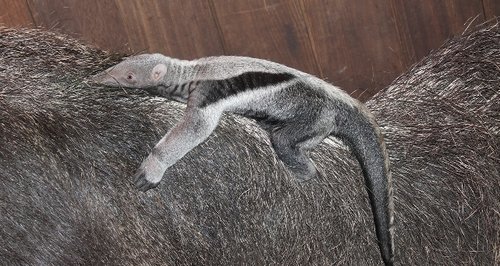 Marwell Zoo near Winchester has announced the birth of a healthy anteater pup, born to first time Mum ‘Chiquita’.

The youngster, which weighs just three pounds (the same as a bag of sugar and a tin of beans), was 10 days old on Monday November 11 and is going from strength to strength.

Shelly Parkes, Collection Manager at Marwell Zoo said: “We have been patiently waiting and are absolutely delighted to have the first successful anteater birth here at Marwell.”

Giant anteaters are native to South America and are listed as ‘Vulnerable’ in the wild. Females normally give birth to one baby at a time, after a gestation period of 190 days.

All anteater pups cling onto Mum’s back or legs while they are young and can continue to do so for up to a year. The pup suckles milk and will begin to start eating solids from 3 months old.

Shelly added: “We are so proud to see Chiquita carrying the baby as it hitches a ride across her back and demonstrating maternal instincts as it’s her first pup.

"She seems content and we can hear the pup feeding and occasionally whistling as she talks to mum.”

"Mum and baby are currently spending a lot of their time indoors and are enjoying the heaters in their den during the cold weather.

"They are difficult to see at the moment while she bonds with her new arrival. However, animal teams will keep an eye on the situation and the pair will move to a more visible position in a couple of weeks. We will keep the public informed with any movements on facebook."

Chiquita, who is two years old, arrived at the zoo nine months ago from Warsaw. She met resident male ‘Ernesto’ and the pair got on brilliantly.

Ernesto, who is nine years old, had previously been unlucky in love. Ernesto’s first mate was described to Marwell as a female but when the new mate arrived the pair didn’t mix well. On closer inspection Marwell Zoo staff realised they had been sent a male anteater instead of a female! This is an easy mistake to make as an anteater’s gender is notoriously difficult to determine.

The new baby will be given a health check once Mum is settled and the sex will be determined when it is older.

The animal teams looking after the anteaters have already got a few ideas for names and they are asking the public to help them decide.