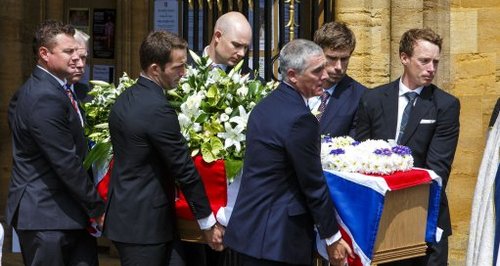 The four-time Olympic sailing champion spoke outside Sherborne Abbey ahead of Simpson's funeral, and described the father-of-two as "a friend to us all''.

Hundreds of mourners - family, friends and fellow sporting champions - are expected to attend the service in Simpson's home town of Sherborne in Dorset.

"We are all devastated by Andrew's loss and it has been a very difficult period for all of us as we come to terms with his passing.

"Andrew was a devoted husband, adored father of Freddie and Hamish, son, brother and friend to so many of us.

"The fact that so many people have come here from all over the world speaks volumes of the kind of person Bart was.

"Whether Andrew met a young kid learning to sail or a four time America's Cup winner, everyone loved Bart because of the person he was.

"He always had a smile on his face and that is the way we will always remember him.

"One of the things Andrew was truly passionate about was helping young sailors get into the sport and for that reason we are looking at setting up a charity in the near future in Bart's memory.

"Leah especially sees the day as a way to celebrate Andrew's life and to remember Andrew as we all knew him.

"In many ways Bart was understated in life, this is really the occasion to celebrate his life and to remember what a huge impact he has had on us all.

"This is a fitting tribute to the person who gave so much.''

Sir Ben was a pallbearer at the funeral, along with sailing greats Nick Harrison, Chris Brittle, Paul Goodison MBE and Anthony Nossiter.

Sherborne, where Simpson, 36, lived with wife Leah and their two young sons, has been dressed with red, white and blue bunting in honour of its sporting hero.

Simpson, respected at home and abroad as a talented but fierce competitor, was killed while training for the America's Cup in San Francisco Bay on May 9.

He died after being trapped under his super fast AC72 catamaran when it nosedived, capsized and broke into pieces while training with Artemis Racing.

The father-of-two won gold alongside Percy at the Beijing 2008 Games and silver at the London 2012 Olympics in the Star discipline.

Speaking to the Press Association before the service, Simpson's sister Amanda said he was her "inspiration for 33 years''.

"As many people have told me in the last few weeks Andy has accomplished more in his 36 years than most people do in their lifetime.

"We have been deeply moved by all the beautiful tributes received during this immensely sad time.

"When we were young I annoyed him as all younger siblings do, but as we matured our relationship changed. He would look out for me at sailing events and would always be there to help pull my boat up the beach and we would discuss tactics.

"I look forward to teaching both Freddie and Hamish how to sail so they can also share in our passion for sailing.

"Andrew's presence will be greatly missed by our whole family and we look forward to setting up the charity to carry on inspiring grassroots sailing in Andrew's memory.''

Following a private burial, there will be a celebration of Simpson's life at Sherborne Castle.

Mourners have been asked to bring photographs of Simpson which will be used to create a memory wall.