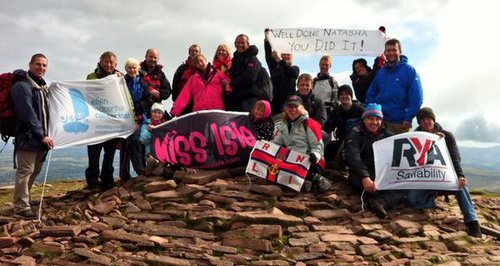 A disabled teenager from the Isle of Wight has climbed the highest peak in the Brecon Beacons in Wales after completing a 430-mile sailing challenge.

Natasha Lambert set off in her 21ft (6.4m) yacht from her home town of Cowes on 20 July and arrived in Swansea, South Wales, on Tuesday, completing the first part of her 'sea and summit' challenge.

Almost exactly one month later, the 17-year-old, who has cerebral palsy, has achieved her aim of sailing 440 miles before swapping her boat for her special walking aid, called a Hart Walker, to climb Pen Y Fan, the highest peak in Southern Britain.

She completed today's climb in three-and-a-half hours, arriving at the summit at 10.15am.

Natasha sails her 21ft boat, Miss Isle Too, by breathing through a straw in a specially-engineered bicycle helmet designed by her dad Gary.

Through the Sea and Summit challenge Natasha is raising money for the RNLI, the Ellen MacArthur Cancer Trust and the RYA Foundation, as well as the profile of sailing for people with disabilities.

On completing the sailing trip, Natasha said her reaction was "Wow'' and it had been "cool''.

Natasha is undertaking the challenge to inspire other youngsters of all abilities to achieve their dreams and to raise money for three charities - the Ellen MacArthur Cancer Trust, RNLI and RYA Foundation.