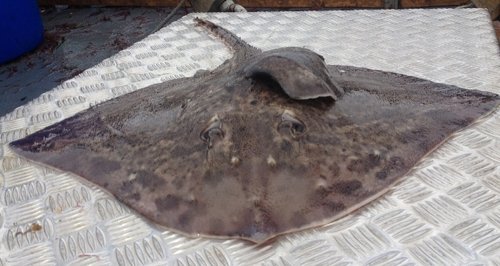 A mutant skate which has an extra fin growing in the centre of its back has been landed by a south coast fisherman.

The skate was caught off Warren Point in The Solent, by fishing boat ‘No More’ skippered by Stephen Stimson.

Realising its rarity, he contacted aquarists at the nearby Portsmouth Blue Reef Aquarium where the skate, which has been nicknamed ‘Elvis’ due to the fin’s similarity to a quiff, is being looked after in a quarantine tank.

Blue Reef Aquarium’s Lindsay Holloway said: “It’s not like any other skate that I’ve ever seen before.

“When it first arrived we thought it could have been a kind of genetic throwback to a distant common ancestor which skates share with their cousins the sharks.

“However on closer inspection we realised it wasn’t a dorsal fin, like on a shark, but more likely a bizarre mutation.

“Elvis is fully grown and, apart from the extra fin, is in excellent condition so whatever the cause it certainly doesn’t appear to cause him any problem hunting.

“Once he’s been given the all clear the plan is for him to go on public display in our open top tank where visitors will be able to get a close up view of him,” he added.

Thornbacks are the most numerous skate in British waters and can grow up to 1.2 metres in length. The species gets its name from the coarse prickles which cover their upper body.

The Blue Reef aquarists were so intrigued by Elvis’ appearance they contacted experts at the Natural History Museum in London.

"The general consensus is that it’s a mutation, and probably more likely an out of place extra pelvic fin rather than a new dorsal fin,” said James Maclaine, Fish Curator at the Natural History Museum.

“Mutated skates do turn up from time to time, sometimes with fin anomalies that make them heart-shaped, but we still have never seen anything quite like this one before,” he added.

Rays and skates belong to the same family as sharks and are effectively ‘flattened-out’ versions of their close cousins.  UK waters are home to at least 15 different species including the electric ray and the common skate, which can reach lengths of up to three metres.