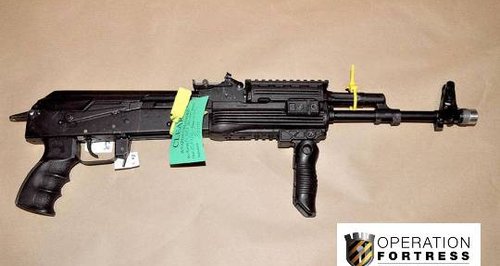 A drug dealer who kept a gun at his home in the New Forest has been put behind bars for 11 years.

The AK47 rifle was found by police after searched his home in Lymington last July.

David Williamson, 28, of Howards Mead, Pennington, was found guilty of possessing the firearm and its ammunition following an investigation by the Operation Fortress team.

He was also found guilty of being concerned in the supply a class A drug and was sentenced today (Friday, January 17) at Bournemouth Crown Court to four years for the firearms offences and a further seven years for the supply offences to run consecutively.

“While there is nothing to indicate that this weapon has been used in a recent crime, it is by definition designed to do one thing and its proximity to ammunition enhances its potentially lethal consequences.

"Firearms are often used by organised drugs groups to cause fear of violence as well as to kill and injure.

"The possession of this weapon in these circumstances posed a significant risk to the public.

“I’m pleased to say therefore that this firearm and its ammunition, all of which are prohibited by law, have now been taken off our streets and will be destroyed.

“David Williamson’s conviction and the recovery of this lethal weapon and evidence of related drug supply is the result of excellent local policing and the Operation Fortress investigation team working together.

“It sends a clear message that we’re taking a pro-active approach to making Hampshire and the Isle of Wight hostile places for anyone thinking of coming here to deal drugs and harm or intimidate others."