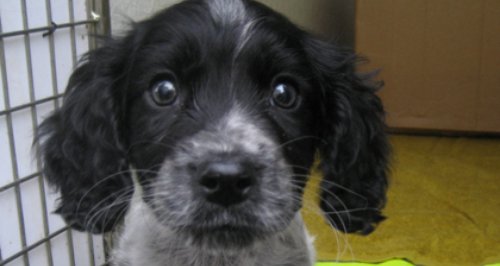 A young puppy has been found near to the public toilet block on Petersfield Heath early on Friday 10 January by a local resident out walking her dog.

The puppy was sniffed out by the resident’s dog from behind a bin and it then ran inside the toilet block where it appears to have been left along with a towel for the dog to lay on.

The puppy, who has been named Heath, has been checked by local vets and found to be in good health and is believed to be an eight to ten-week-old male Cocker Spaniel type.

Animal Welfare Officer Dave Griffiths from East Hampshire District Council said: “Owning a dog requires a commitment from the owner to ensure that a dog, like any other animal, receives proper care and attention.

“Sadly it seems that this little puppy was abandoned at the public toilets on Petersfield Heath by a person who no longer wanted him. There are many local and national animal rehoming charities that might have been able to help in the first instance and the owner of the puppy should have contacted one of these organisations.”

As the puppy is around eight to ten weeks old it is thought that he may possibly have been a Christmas gift that is now no longer wanted. Heath is currently being cared for by a foster carer.