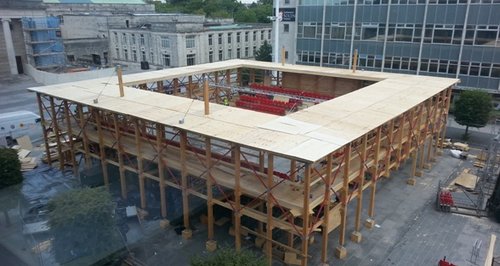 A 450-seat pop-up wooden theatre's been built in Southampton's Guildhall Square, ahead a three-week arts and music festival starting tomorrow.

'Art at the Heart' features a new play about Southampton FC, concerts and film screenings like 'Jaws' and 'Willy Wonka'.

The festival, Art at the Heart, celebrates the 50th anniversaries of both Nuffield and the City of Southampton and will take place at Nuffield’s unique pop-up venue, Nuffield Playing Field, located in Guildhall Square at the heart of Southampton’s Cultural Quarter. The festival and pop-up venue are precursors to the opening of the new arts complex in 2016.

Sam Hodges, Chair of Art at the Heart and Creative and Executive Director of Nuffield, said:

“As Nuffield and the city celebrate their joint 50th birthday, I can’t think of a better party than a setting up a stunning new pop-up venue in the centre of town, with Southampton’s community the essential revellers and guests. It is great to bring so many of the City’s arts organisations together to present the diverse array of work that Southampton offers.

"For Nuffield, this is the start of a commitment to work in and across the city on a regular basis; for the city, it marks the emergence of a unified cultural offer.”

“This event will bring together the best of our local arts and entertainment scene in a unique setting at the heart of our cultural quarter. I hope and expect this to be one of the high points of our 50th year celebrations, an anniversary we share with Nuffield.”