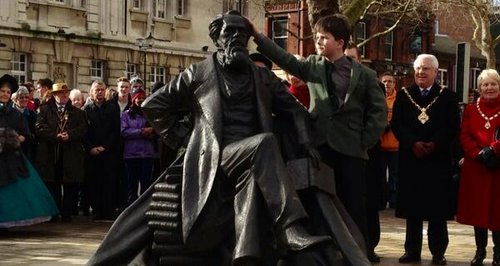 The first statue in the UK of literary giant Charles Dickens has been unveiled - despite it being against his dying wish to have a monument erected in his memory.

More than 40 descendants of the 19th century novelist attended the ceremony at Portsmouth's Guildhall Square which is less than a mile from the house where he was born 202 years ago today.

Among those who took part in the event was nine-year-old Oliver Dickens, from Froxfield, near Petersfield, Hampshire, who is a great-great-great-grandson of the author.

He said: "It feels really special. I've read his books and I love Oliver Twist the best.''

The statue has been created by sculptor Martin Jennings whose previous subjects include Sir John Betjeman at St Pancras Station, London, and Philip Larkin in Hull.

The over life-size statue in bronze, which cost £140,000, features Dickens sitting down surrounded by books.

Mr Jennings said: "I wanted the statue to express Dickens's energy, the richness of his imagination and the abundance of his output. It's also quite theatrical, fitting I hope for a man who loved the stage. It's taken many months to make but I hope people think it does justice to the great man.''

The statue has been installed despite Dickens stating in his will that he did not wish as part of his funeral to have a monument created in his memory.

He said: "I conjure to my friends on no account to make me the subject of any monument, memorial or testimonial whatsoever. I rest my claims to the remembrance of my country upon my published works.''

However, following his death from a stroke in 1870, his other wish to be buried at Rochester Cathedral was over-ruled and he was laid to rest in Poets' Corner at Westminster Abbey.

And a statue was erected in Philadelphia, USA, in 1891 and another created later in Sydney, Australia.

Defending the decision to create a statue for Portsmouth, Professor Tony Pointon, chair of the Charles Dickens statue committee which has been raising funds for 20 years for the project, said: "He did not mention a statue, he didn't say 'I do not want a statue', he didn't want a monument for his funeral, he didn't want a funerary monument, in fact he sat for three sculptors when he was alive.''

Oliver Mark Charles Dickens, 21, another great-great-great-grandson, from Tunbridge Wells, Kent, said: "Dickens touched so many people and the best thing about the statue is that it is at ground level so people can interact with it, can touch it.

"We are 202 years from his birth, he has made us so proud as a family and we are giving something back.

"I do not feel we are taking liberties, we want to celebrate him, not annoy him.''

Stage and screen actor Edward Fox and his wife Joanna David gave a reading at the unveiling and they were joined in the Guildhall Square by members of the Pickwick Cycle Club on their penny farthing bicycles.

Mark Charles Dickens, a great-great-grandson, and head of the Dickens family said: "The Dickens Family is delighted that a statue of our famous ancestor will at long last be erected in this country, and most fitting that it should be on his 202nd birthday in the city of his birth, where by coincidence his mistress and childhood sweetheart are also buried.

"This is the culmination of years of hard work by many dedicated people and we really hope that this magnificent statue will stimulate and inspire future generations to discover the genius of his writing and his passionate campaign for social justice.''

"This is a marvellous tribute to an incredible man. Everyone in Portsmouth should feel immensely proud that the statue of Dickens is here in his home town.''

Other guests at the event included the youngest member of the family 26-month-old Joe Robinson who is a great-great-great-great-grandson while two members of the Dickens Pickwick Club, Michael O'Reilly and Dennis Babcock travelled from America specifically for the unveiling.