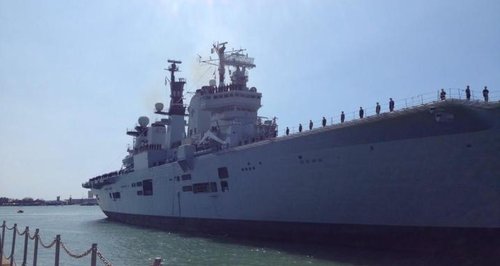 Hundreds of people have lined the harbour walls and jetty to wave home the Royal Navy's helicopter carrier HMS Illustrious as it sailed into port for the final time.

Following 32 years of service, "Lusty'' has returned to Portsmouth Naval Base, Hampshire, with a decommissioning ceremony to be held later in the year.

The carrier, which was rushed into service for the Falklands War, will be replaced by HMS Ocean which has just received a £65 million refit until the next generation of aircraft carriers come into service.

The two carriers met in the Solent this morning to hand over ``the baton of protecting the nation's interests''.

Illustrious gave a gun salute as it arrived at the mouth of Portsmouth Harbour and its arrival was marked with a flypast of Apache, Lynx, Merlin, Sea King and Chinook helicopters as well as a hawk jet and a Second World War-era fighter plane.

The warship, which arrived with its 700-strong ship's company, flew a 210-metre decommissioning pennant.

Captain Mike Utley, the ship's commanding officer, said: ``I feel a little sad as you would expect quite honestly, and I would say extremely proud of what the ship has achieved, about what my team has achieved.

``I have mixed feelings but all with a complete optimism for the future given what the navy has got coming, Ocean is back out after an extensive refit and we were at HMS Queen Elizabeth's naming just a few weeks ago.''

Mrs Dennett, originally from Newcastle-Upon-Tyne but now living in Portsmouth, said: ``It's quite sad, it's quite emotional. It's the end of an era.

Warrant Officer Steve Barr, 51, from Fareham, Hampshire, was serving on board Lusty when it was commissioned on its way to the Falklands and when it was formally commissioned after its return to the UK and has served a total of 15 years on board.

He said: ``It was such a good ship that it was commissioned twice, or we like to think so.

``I've got mixed emotions, it's sad but tinged with the fact that it's retiring and I'm retiring next year so I'm happy to spend more time with my family.

``Also this is the old technology and the new ships are coming in.''

``During her 32 years of service she has protected our nation's interests in the Falklands, Bosnia, Iraq, Sierra Leone and most recently the Philippines.

``The decision to replace her in service with HMS Ocean will ensure that the Royal Navy has her most advanced and capable ships working to protect the nation.

``It was only fitting therefore that HMS Illustrious' final high profile public role was to support the naming by Her Majesty of the Royal Navy's new aircraft carrier HMS Queen Elizabeth on July 4.

``Poignantly the ceremony allowed us to celebrate the Navy we have known so well for so long with the navy of the future, side by side.

``The Royal Navy will of course mark the departure of HMS Illustrious with all the pride she deserves and is supportive of plans to retain her intact in the UK to preserve the legacy of the Invincible class and all those who served in them.'' 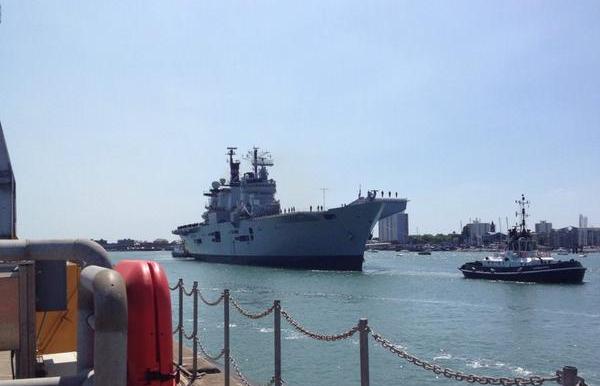 llustrious is the last of the Invincible class of aircraft carriers which included the Ark Royal and Invincible which were introduced into the navy in the 1980s.

While its sister ships were sold for scrap after they were retired, the Government has indicated that Illustrious could be turned into a floating museum as a tribute to the decommissioned class of warship.

A navy spokesman said: ``The Ministry of Defence has invited tenders from private companies, charities and trusts to secure HMS Illustrious' future.''

Illustrious, which was built by Swan Hunter shipbuilders on the Tyne and launched by Princess Margaret in December 1978, had its entry into service brought forward so it could assist in the Falklands War effort.

The 22,000-tonne ship's deployment was so rushed that its commissioning ceremony took place at sea en route to the Falklands on June 20, 1982 while it was formally commissioned on its return. During the conflict, it relieved sister ship HMS Invincible in providing a floating airfield for aircraft unable to use the islands' damaged RAF base.

Illustrious then went on to support the forces in Afghanistan and served in the Bosnian and Sierra Leone conflicts and also helped evacuate Britons during the Lebanon war in 2006.

In 2008 the carrier became the star of Channel 5's six-part documentary Warship which followed its deployment to the Mediterranean, Africa, the Middle East and south-east Asia for a series of exercises and diplomatic visits to 20 ports.

And last year, Illustrious was involved in the efforts to distribute disaster relief in the wake of Typhoon Haiyan in the Philippines.

Following the retirement of the Harrier aircraft in 2010, Illustrious went on to serve as one of the navy's two helicopter carriers, the other being Plymouth-based HMS Ocean.

Its role will be replaced by the first of the new aircraft carriers, HMS Queen Elizabeth, which is set to be commissioned in 2016.