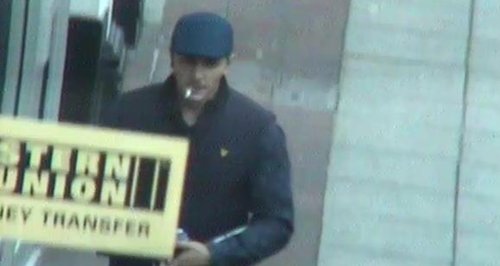 Police in Portsmouth are warning about a scam to steal people's bank cards.

At about 7.20pm on Wednesday 4 June, a 19-year-old man used the ATM at Lloyd's Bank in Cosham High Street when the machine appeared to have taken his card. A short while later the stolen card was used to withdraw £300 from another ATM in the area.

A 26-year-old woman was arrested in connection with the incident after officers were alerted to reports of two people acting suspiciously near to the cashpoint machine.

Police investigating the incident would like to hear from anyone who thinks they may have come across anyone acting suspiciously in similar circumstances or witnessed the incident.

They would also like to hear from anyone who knows who the man is in the CCTV still (above).

- If you are using an ATM, take the time to check that there is nothing suspicious about the machine.
- If the ATM looks suspicious, do not use it and alert the ATM owner.
- If you think you have been the victim of a card skimming scam, you should contact the bank or credit card provider that has been targeted.

Those with information about the crime are asked to call DCID at Fratton Police Station on 101 quoting crime reference: 44140196835 or call Crimestoppers anonymously on 0800 555 111.