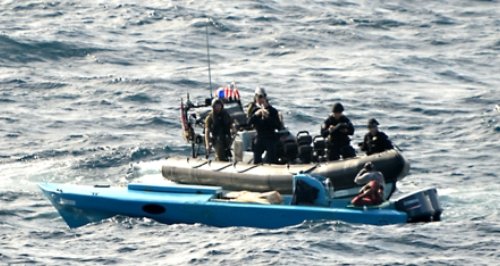 Royal Navy sailors have seized cocaine worth £100 million in a drugs bust near Puerto Rico.

Sailors from HMS Lancaster seized 680kg of pure cocaine, made of 22 bales, after boarding a speedboat near the Caribbean island, the Ministry of Defence said.

The boat, which was hidden by a tarpaulin, had been spotted by a US Customs and Border Agency aircraft, prompting the bust.

"This extraordinary quantity of drugs has been stopped from reaching the streets by the swift actions of the Royal Navy, working closely with the US Coastguard.

"This is HMS Lancaster's second counter narcotics patrol in the Caribbean to tackle the drugs trade and the entire ship's company should be proud of this remarkable achievement.

"This is another example of the skills and capability that mean our Armed Forces are held in high regard by our partners around the world.''

After the 30ft speedboat was spotted by a US Customs and Border Agency aircraft, a Lynx helicopter and high-speed pursuit boat were launched from Portsmouth-based HMS Lancaster to intercept the vessel.

Three suspected smugglers threw the drugs overboard, but they were recovered by divers, the MoD said.

A total of 22 bales of pure cocaine were seized along with the three men. They, and the drugs, were handed over to the Coast Guard cutter Sapelo and then authorities in Puerto Rico.

The empty drugs boat was then sunk by Royal Navy gunfire - in line with standard procedure - to prevent its use in future smuggling operations.

The Type 23 frigate's commanding officer, Commander Steve Moorhouse, said it was the third success in as many weeks for the ship, which is working with US authorities as part of a joint effort to fight drug smuggling in the Caribbean.

"This is a great result, not only for Lancaster but also everyone involved in the multinational effort to stem the flow of drugs in the region,'' he said.

"My ship's company can be incredibly proud of what they have achieved, their professionalism and teamwork continue to shine, and our close relationship with our partner nations and law enforcement agencies is proving to be hugely successful.

"This is the ship's third success in as many weeks and follows on from the seizure of a shipment of marijuana with a street value of up to £700,000 and the stopping of another craft with a significant amount of cocaine and heroin on board.''

HMS Lancaster is currently on patrol with a team from the US Coast Guard Law Enforcement Detachment who provide intelligence in catching drug runners.

She is on her second counter-narcotics patrol of the Caribbean region and will continue to fight drug smuggling until the end of the year.

The patrols are part of Operation Martillo, a 15-nation effort to fight drug smuggling and to stop the movement of drugs from South America into the Caribbean and onwards to the UK.

As well as counter-narcotic operations with the USA, HMS Lancaster is carrying out other tasks across the Caribbean to support British interests, including providing reassurance and security for British Overseas Territories and the provision of humanitarian aid and disaster relief during the core hurricane season.