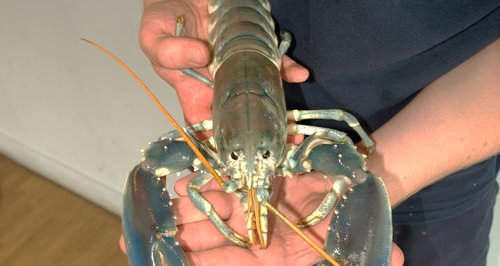 A rare sky blue lobster is settling in to its new home at Portsmouth’s Blue Reef Aquarium after being discovered at a local fish merchants.

The unusual crustacean was spotted by staff at Viviers Fish Market who realised its rarity and contacted the Southsea aquarium.

The colouration is believed to come from a genetic defect that causes the lobster to produce an excessive amount of a particular protein that literally turns the crustacean light blue.

“It’s not the biggest lobster in the world but it’s definitely quite unusual.

“The colouring is darker on the claws but the main body of the lobster is a much lighter sky blue and underneath it’s virtually white.

“Despite its rarity it’s in excellent condition and, once it’s been given a thorough health check in quarantine it will go on public display."

The European lobster is the largest and strongest of all British crustaceans. It can live for 40 years or more and the largest ever caught was landed in Cornwall in 1931 - weighing in at 9.3kgs and measuring an amazing 126 centimetres long from tail to tip of antennae.

According to the Guinness World Records, the heaviest marine crustacean ever found was a North Atlantic lobster that weighed 44lb 6oz (20.14kgs). It was discovered off the east coast of America in 1977.

Lobsters are among the planet’s oldest inhabitants with fossil remains found dating back more than 100 million years. They are also extremely long-lived with some individuals reaching ages in excess of 80 years.

A lobster’s claws grow much faster than the rest of its body. In one giant specimen its claws were twice the weight of the rest of the animal.

As with most members of the crustacean family, lobsters are also able to re-grow lost limbs and even re-generate missing eyes.