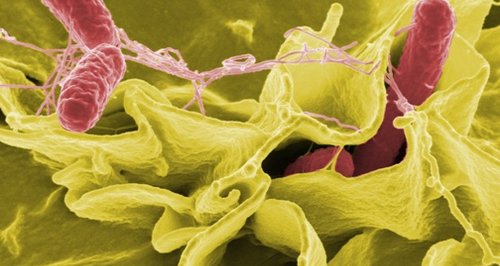 The national salmonella outbreak which has struck down nearly 250 people across Britain could be traced back to a single source of eggs, health investigators have said.

Public Health England (PHE) has been trying to track down the origin of the outbreak of the nasty strand of food poisoning, which causes vomiting, diarrhoea, stomach cramps and fever.

Break-outs have erupted across the country, with 99 cases recorded in Hampshire, 30 in London, 39 in Cheshire and Merseyside, and 54 in the West Midlands.

Earlier this month, three hospital patients affected by the salmonella outbreak in Birmingham died. But the infection was not cited as a contributing factor on the death certificates of two patients and the coroner's report on the third patient has not yet been delivered.

Health officials said there have been 158 cases reported in the past week alone - since August 15 - but said these are not new infections but historical cases and that the reporting of new infections had in fact slowed down.

Dr Paul Cleary, consultant epidemiologist at PHE, said investigators had traced the outbreak in Europe to a single source of eggs which also reached catering outlets in England. But it has not been confirmed this is the root of the outbreak in this country.

He said: ``Investigations into the recent Salmonella Enteritidis outbreak are progressing, at both a national and European level.

``There is now evidence to indicate that cases in Europe with the same strains of salmonella infection were associated with consumption of eggs from a single source.

``This egg supply also reached distributors and food outlets in England, but at this stage we cannot conclusively demonstrate this is the infection source in this country.

``We are continuing to work with the Food Standards Agency and public health organisations in Europe but, importantly, the decline in salmonella case reporting this week alongside other elements of our investigations reassures us that the current risk to public health is low.''