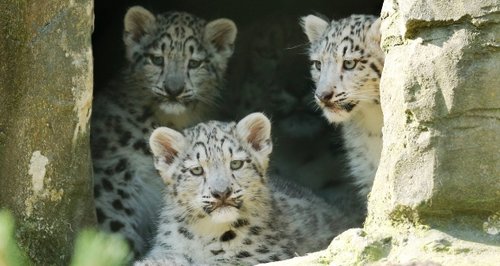 Marwell Zoo’s three snow leopard cubs have taken their first steps outside into their new home.

The baby leopards, two male and one female, were born in April and have been closely monitored by Marwell’s animal keepers.

“It’s really good to see the cubs out and about and they have already developed their own personalities. It will be interesting to see if they come out of their shell more now they have a larger space.

“To have three cubs is really rare as leopard cats would normally only have one or maybe two cubs.

“This is Irina’s second litter and she is an excellent Mum. We are really looking forward to watching these cubs explore their new home- it’s great fun watching them play together!”

The cubs’ parents, Mum Irina and Dad Indeever, arrived at the park in January 2010 as part of the European endangered species breeding programme (EEP).

“Snow leopards, like all big cat species, are threatened in the wild. This means that maintaining a healthy captive population of snow leopards is of vital importance to the global conservation strategy for the species.”

Animal keepers named the female cub Animesh which means ‘bright’ and ‘to stare open eyed’ in Nepalese. This name was chosen because she opened her eyes particularly early. A male cub was given the name Ariun which means ‘pure’ in Mongolian and now the keepers are asking the public to help them name the second male cub.

A favourite shortlist of names will be picked by the zoo’s carnivore keepers and the public can decide which is their preferred name. The prize is an exclusive behind the scenes experience at the snow leopard home.

Please visit www.marwell.org.uk/cubs for more details on how to submit your chosen name and for terms and conditions.