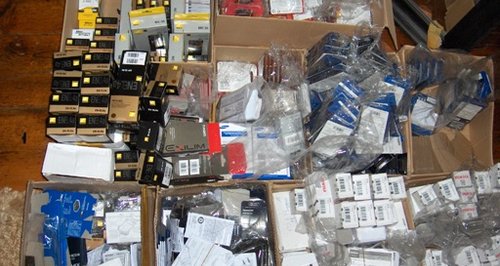 A Southampton man who made £350,000 over an 18 month period from selling fake electrical goods online has been sentenced to three years and three months in jail.

During the seven week long trial at Portsmouth Crown Court, the jury heard that police started an investigation when they were made aware McGovern was making transfers of large sums of money to China and Taiwan.

When McGovern’s home was raided in 2012 by Hampshire County Council Trading Standards Officers and Hampshire Constabulary Officers, they found bags and boxes full of counterfeit batteries, remote controls and other similar accessories bearing brand names such as Canon, Casio, Pentax and Nikon from China.

McGovern had been selling the items on the Amazon Marketplace website. Some of the batteries were very poor in quality, containing simple spelling mistakes such as ‘ecplode’ instead of ‘explode’ and ‘conditiom’ instead of ‘condition’.

McGovern was convicted, at Portsmouth Crown Court on Friday 6 December, of 14 offences contrary to the Trade Marks Act 1994 and one offence contrary to the Proceeds of Crime Act 2002 for laundering the proceeds of his criminality.

His explanation that he had purchased genuine products, which had been switched by a third party for fakes was not accepted by the jury.

Officers from Hampshire Trading Standards and Hampshire Constabulary will now use the Proceeds of Crime Act to seize cash and other assets from McGovern.

“These criminal activities severely damage the local economy and legitimate traders by gaining a competitive advantage at their expense, and taking trade away from genuine hard-working businesses. This is an excellent example how positive, effective results can be achieved in the public interest through joint working with partner organisations, in this case Hampshire Constabulary.”

"We are extremely pleased with the outcome of this complex investigation. The investigation highlights the benefit of partnership working.

“The case sends out a clear message that it’s unacceptable to defraud the public into parting with their money for goods that are anything other than genuine.

“People do not always realise the dangers they expose themselves to when purchasing counterfeit goods and McGovern has clearly exploited a desire to obtain a bargain without any consideration of the consequences.”