Dorset and Hampshire suffered from flooding, fallen trees and house fires during a thunder and lightning storm which hit the south coast on Tuesday 22nd October.

Numerous trees were uprooted across Dorset and Chichester during the storm, with reports of flooding in areas of Portsmouth and on The Isle of Wight.

In Southampton, a three-storey block of flats had a section of roof blown off in the winds.

Portsmouth Football Club had to postpone their match with Wycombe, after the pitch became flooded - see the club's photos HERE.

Lots of you posted this photo of the flooded players tunnel on twitter: 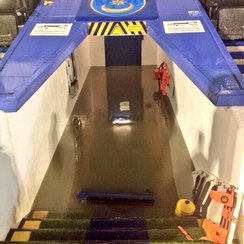 Dorset Fire and Rescue were called out to a Bungalow in Oakhurst Road in West Moors, Ferndown, at around 18.06 hrs after lightning struck the property and set the roof alight. Three crews worked for over three hours to bring it under control. No one was injured.

Meanwhile in Hampshire, crews were called to another roof fire in Shirrell Heath. It's thought that was also caused by lightning striking the house.

The aerial ladder platform from Southsea and the special equipment unit from Cosham were also deployed. 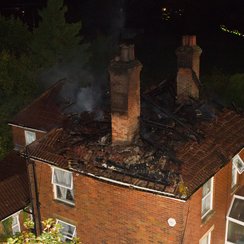