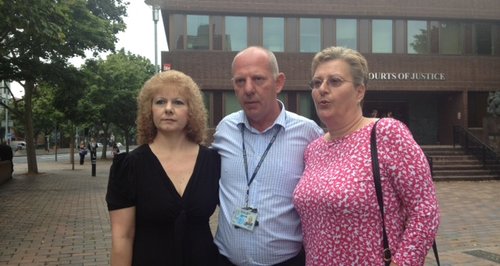 A teenager's been jailed for 5 years and 4 months for carrying out a brutal attack on a Gosport man that left him in a coma.

Warehouseman Andrew Toseland, 49, and his brother Robert were attacked by Samuel Armstrong and Brandon Fisher, both 19, after they had gone to ask them not to be so noisy outside the flat in Forton Road.

The beating on August 25 last year left Mr Toseland in a coma in hospital with brain damage. He is now in a care home and will require nursing for the rest of his life, and he cannot walk.

Matthew Lawson, prosecuting, said the pair had been at a party at a block of flats in Forton Road on August 25 last year but had been kicked out. Fisher had drunk half a bottle of vodka and the two, with others, were making a noise - prompting the Toseland brothers to leave their flat to ask them to be quiet.

After a row Robert Toseland was punched and the youths left only to return with another boy, then aged 16.

The Toselands came out of the flat again and were immediately attacked by Armstrong who punched Robert Toseland and aimed a flying kick at Andrew Toseland, the barrister said.

The men left with Mr Toseland unconscious in a pool of blood. He suffered blood clots to the brain and his glasses had been smashed into his face, the court heard.

"The brother (Andrew Toseland) was simply trying to stop the noise outside his flat late at night,'' Mr Lawson said.

Samuel Armstrong has been jailed for 5 years and 4 months over the attack, which a judge called 'wicked and sickening'.

Fisher, 19, of Old Road admitted unlawful wounding on the basis that he had a subordinate role in the vicious assault on Mr Toseland. He was locked up for 27 months by Portsmouth Crown Court on Tuesday September the 3rd.

He did not attack Mr Toseland but held back the victim's brother while Armstrong, also from Gosport, carried out the assault.

Fisher told Armstrong to stop when he realised the assault was so severe, a court has already heard.