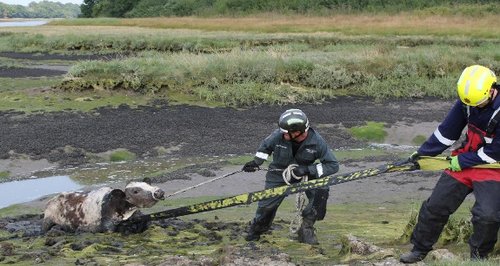 A young cow was rescued from an impending high tide by firefighters after it tried to grab a cooling drink from a Southampton river.

The nine-month-old Belgian blue got stuck in mud trying to reach the River Hamble near Manor Farm Country Park in Lower Swanwick at around 15:50 on Thursday July 18th.

Animal rescue specialist Buster Brown, assisted by firefighters from Lyndhurst and Hightown, faced a race against time to free the calf before high tide.

Watch Manager Brown said: "The farmer had allowed his herd of around 20 young calves into the field for the first time and this one had tried to get down to the river for a drink.

"It got stuck in mud around 20m from the hard shingle bank so we attached a strop around its upper torso and and were able to ease it out, sliding the calf across the mud to safety.

"The tide had begun to turn so we had to work quickly and efficiently to ensure the animal was clear of the water before the high tide."

The calf was released by 17.15 and was unharmed.