Tributes To Boy Killed In Motocross Crash Near Winchester 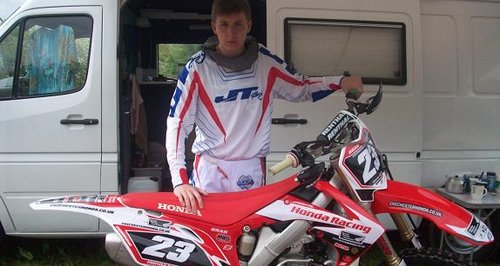 A teenager who died after a collision at a motocross event near Winchester's been described as a kind and considerate person who made everybody laugh.

16-year-old Bradley Hooper from Farnham, Surrey, suffered serious injuries in a crash with another rider at Down Farm in Headbourne Worthy at around 11.20am on Sunday 11 May. He was taken to hospital via air ambulance, but sadly died of his injuries.

His family have now released the following tribute:

"Bradley was full of life and lived life to the full. Sadly he has been taken from us at such a young age. He was kind, gentle, considerate, and made everybody laugh, and always had an infectious smile on his face. He loved playing jokes on people and making funny faces.

"His passion in life was any sport; he was in the school football team, and captain of the school basketball team. He played for Woking Blackhawks basketball team. He enjoyed mountain biking, riding his BMX, going to the skate park on his stunt scooter, and playing golf. He was also in four school drama productions, he was so talented. He also done football coaching with Mr Steve Liddle for Badshot Lea football club during the school holidays for children aged 4-11, the list is endless.

"His biggest passion has always been motocross and started at the age of 6.  His biggest hero was Ricky Carmichael, but also Brad Anderson.  He has ridden for many motocross clubs, but his main club was Mid Sussex and has been a member for many years and throughout that time he had made so many lovely friends who all had the same passion, motocross.

"He was a pupil at Farnham Heath End School and was about to take his first GCSE exam on Tuesday 13th May. He had been studying very hard for his exams and had been accepted for a place at Farnham Sixth Form College to do a BTEC level 3 diploma in Sport.

"As a family we are so overwhelmed by the number of messages on Facebook, the messages make us all so proud of what a lovely boy he was.

"May we take this opportunity to thank the Paramedics and Air Ambulance in their efforts to save Bradley.  We also want to thank the Police and Liaison Officer for all their help and support at this very difficult time.

"God bless you dear Bradley you are always in our thoughts and our hearts, rest in heaven our dear Angel, ride that bike hard up there, we will see you soon xxxxxxx.

"Please could you leave us to grieve."