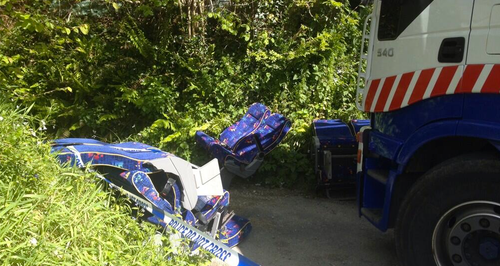 Heart will bring you the latest on the coach crash near Looe which has claimed the lives of 2 people.

Police confirm the two people who died in the coach crash were women.

Police say they believe the coach involved in this afternoon's crash was being used for a trip organised by Age Concern in Exmouth.

Police confirm 2 people have now died in the coach crash

A387 in both directions closed, queueing traffic due to serious accident, coach and a wall involved between B3252 (Widegates) and B3254 Sandplace Road (Sandplace).

Police and other emergency services are dealing with a fatal collision involving a coach in the Looe area this afternoon, Tuesday 13 May.

At around 1pm police officers were called to the A387 at Morval, around three miles from Looe, to reports that a coach had collided with a wall.

The coach had been travelling from the Plymouth direction towards Looe between Sandplace and Widegates when the incident occurred.

One person, a passenger, has died from injuries sustained in the collision.

Fire and ambulance crews were also called to the scene.

There is no information on the age of number of passengers, or the status of casualties at this time but the road has been closed and is expected to remain so for some time.