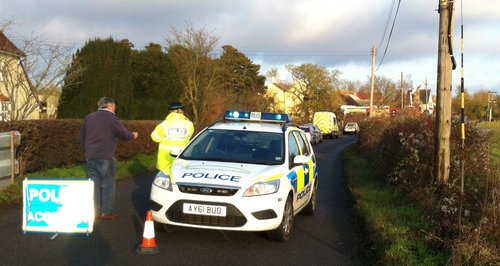 A report into a plane crash in a Suffolk village says the pilot died in an 'unsurvivable crash' after hitting power lines.

Gregory Clipstone became so disorientated after flying through thick cloud, witnesses say it looked like his plane was performing aerobatics before he crashed to his death.

A report into the crash says the 56 year old was killed when his microlight came down into hedges between two houses 65ft apart in Aldham in Suffolk at 11.20am on December 8 last year.

The fire was so bad air accident investigators were unable to tell if there was any technical failure contributing to the crash.

A report by the Air Accident Investigations Branch (AAIB) says Mr Clipstone based his plane at a grass airstrip in the village of Newton, near Sudbury.

At 10am on the day he died he chatted to another pilot there before flying off on a route along the Felixstowe coastline, over Ipswich and back inland.

At 11.05am his plane was spotted by a friend who phoned him and Mr Clipstone, who had recently become a grandfather, said there was mist ahead and he needed to descend to 300ft.

Investigators believe he tried to land at nearby Elmsett airfield but the plane's GPS data showed rapid changes in speed, track and altitude ``suggestive of an aircraft not fully under control''.

As he was making several approaches to land a farmer saw his plane, which roared then began spluttering.

The report says: ``He went outside to watch and realised the weather was poor with, he estimated, a cloudbase of 150ft.

``He considered it odd that an aircraft would be doing aerobatics in those conditions...

``The witness then saw the aircraft drop out of the cloud about 150m east of his location, striking a power cable before disappearing from view behind buildings and trees.

Mr Clipstone, of Opal Avenue, Ipswich, had 634 flying hours of experience but it is believed the weather was so bad he became disorientated and quickly lost control of the aircraft.

He inadvertently made a broadcast transmission of himself breathing for 3.5 seconds.

The Met Office said there was bad fog and mist at the time, and visibility varied hugely from 7km to 900m between 10.30am and 11.30am.

After his death, the pilot's family issued a statement saying: ``Greg was a loving husband, father, brother, friend and recently grandfather.

''He enjoyed spending time with family and friends, flying, and riding his motorcycle. He was always willing to help his friends, family and many loyal customers.

''A firm believer that you can achieve whatever you put your mind to, he has always been an inspiration as a father and to those around him.

''A man of great integrity and honesty, he will be missed greatly by all who knew him.''