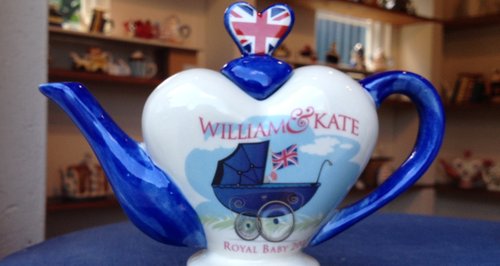 A handmade heart-shaped teapot produced in Suffolk to mark the birth of the royal baby has already received orders from around the world.

A handmade heart-shaped teapot has been produced in Suffolk to mark the birth of the royal baby - and its maker has already received orders from around the world.

A tiny pottery in the village of Debenham is behind the quirky design which celebrates the birth of George Alexander Louis last week.

Tony Carter, of Carter's Ceramic Design, expects to produce hundreds of teapots to meet demand from Italy, Australia, Hong Kong and the United States, as well as the home market.

And with each teapot taking a week to produce, the team of three will be working flat out.

Mr Carter, who produced a similar teapot for the Duke and Duchess of Cambridge's wedding, said: "The idea is to produce something more modern and quirky but which is still a nice tribute.

"I was first approached by a customer in February and asked if we could produce something for the birth.

"It is only now that we all know the baby is healthy and well that we've gone ahead with production.

"For a small business like us it is a great boost.

"We work in a very English and probably inefficient way but hopefully that's what gives it some charm.''