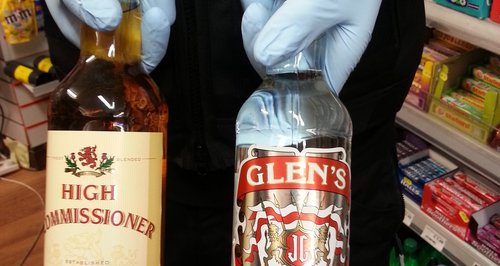 The operation led by Suffolk Trading Standards seized 9560 cigarettes, 4.1 kilos (over 700 packs) of hand rolled tobacco and 25 bottles of alcohol during an operation targeting shops selling illicit tobacco and alcohol in Suffolk

Following an increase in illicit tobacco intelligence and test purchases in Ipswich, the teams swooped down on the stores and within minutes the sniffer dog was searching shelves, stock rooms and cupboards.

Five shops were visited with seizures occurring at three premises. This included fake tobacco, often produced using unknown ingredients which can have health risks, as well as non-duty paid cigarettes. Customers are drawn to such products because they are sold cheaper than standard cigarettes, but the problems of the trade are far-reaching.

“These black market traders cause major problems for legitimate retailers having to compete with so-called bargain prices. Some of the products sold are untested and produced in an environment that is often unsafe and unregulated.”

“Those selling illicit products often have no regard to who they sell to, which can include children. Taking these products out of circulation is a positive step for consumers.”