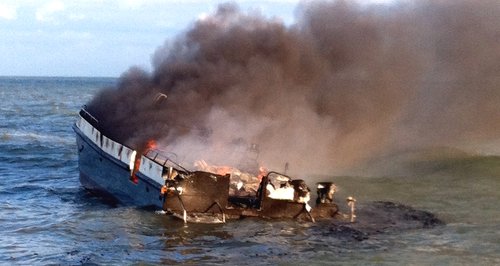 Three men have been rescued after their boat caught fire and sank off the coast of Lowestoft.

Three crewmen have been rescued from a boat which caught fire at sea.

Humber Coastguard was called to the blaze in the North Sea, 10 miles off Lowestoft, Suffolk, after reports the crew had abandoned the ECC Topaz at about 1pm.

The vessel had been heading out to service a windfarm.

The crew, who were wearing lifejackets, managed to get into a life raft while they waited to be rescued by the search and rescue helicopter from RAF Wattisham, the Maritime and Coastguard Agency said.

The crew were winched to safety and airlifted to James Paget University Hospital near Great Yarmouth as a precaution. They are not believed to have suffered any serious injuries.

Graham Dawson, watch manager at Humber Coastguard, said: "The fire was quite severe and the crew had no option but to abandon the vessel.

"The crew had the correct lifesaving equipment and rescue resources were quickly on scene.''

The fuel and oil on board the boat is believed to have burnt off during the blaze before the vessel sank.