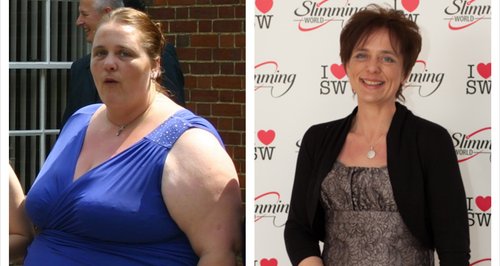 A Suffolk mum is telling Heart how she managed to shift nearly 17 stone and wants to fit into a size 12 dress for a wedding.

Less than two years ago Lesley Richardson weighed more than 27st and worried she’d end up in an early grave, never seeing her seven children grow up. Now she’s lost 15st and her proud kids love telling their friends all about their mum’s amazing achievement!

Lesley, 40, from Mildenhall, says she believes losing the weight at her local Slimming World group has saved her life. She says: “To be blunt, I think that if I hadn’t done something about my weight when I did it wouldn’t have been long until I’d have become housebound or, worse, been in a box six-feet down.”

The full-time mum doesn’t remember a time that she didn’t struggle with her weight and weighed 9st when she was just nine. Her weight continued to increase through high school and afterwards as an adult, and her efforts at dieting were repeatedly unsuccessful. Lesley tried low-carb plans, diet shakes, the Cabbage Soup diet, counting calories and even starving herself but all to no avail – in fact, she says she often finished each weight-loss attempt heavier than when she started.

She says: “I started to think that surgery was the only way I was ever going to lose weight because nothing worked for me and I didn’t want to just get bigger and bigger, which was what I was facing. I had a two-year-old and I knew that if I didn’t do something I wasn’t going to be alive to see her as a teenager and I wanted to be a better mum to all of my children, to be able to play and run around with them. I just sat on the sofa most days.”

She says: “Walking my children to school used to feel like the hardest thing in the world but now I can easily walk 4½ miles. I’ve taken up jogging, I use the WiiFit and one day I’d like to do a parachute jump for charity as before I would have been far too heavy.”

Since December 2011 Lesley’s dropped 15st ½lb, going from 27st 3lb to 12st 2½lb and a dress size 32 to a 14. She’d like to lose another 1st 2½lb and has bought a size-12 dress for her brother’s wedding in August 2013 to provide extra motivation. Lesley says: “I’ve hung the dress in our living room so it reminds me of what I’m aiming for and how far I’ve come. My family and friends have all been tracking my progress along the way too, they’ve been a big support and my kids always tell their friends how proud they are of me.

Lesley’s weight loss saw her reach the finals of Slimming World’s Greatest Loser 2013 competition. She placed joint 9th at a ceremony in London on Wednesday, May 1st 2013. The competition was won by Dean Worrall, from Stourbridge, who has lost 16st 13½lb with Slimming World.  – ends –