Searches Continue In Woods In Ufford 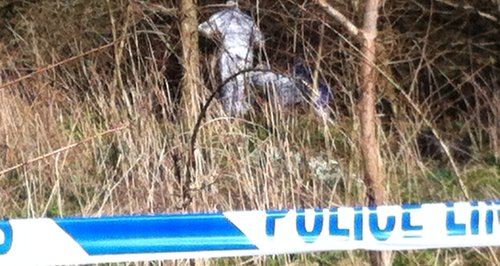 A wooded area in the village of Ufford near Woodbridge remains cordoned off following the discovery of a human bone.

Under the expert advice of a Forensic Osteoarchaeologist, specialist trained search officers and crime scene investigators from Suffolk Police have been meticulously carrying out detailed searches at the wood situated between the B1438 and The Avenue/Parklands area in Ufford.

An area approximately the size of a football pitch has been cordoned off within the wood whilst the searches have been taking place, by the team of six officers and the Forensic Osteoarchaeologist.

Six officers are also on the cordon to ensure the area isn’t entered or contaminated.

Anomalies in the land surface were identified and The Forensic Osteoarchaeologist has worked with the search team focusing on the areas of interest.

Today, Thursday 6 March, the officers have concluded their work at the site but the cordon remains in place to allow for police dogs and handlers specifically trained to locate human remains to carry out searches.

Between 4-5 dogs and their handlers are being drafted in from The Metropolitan Police and will be carrying out searches tomorrow, Friday 7 March.

The bone, which was found during initial searches which took place on Friday 21 February and confirmed as being a human bone on Monday 3 March has been sent off for further analysis to establish its origin.

Detective Superintendent John Brocklebank from the Joint Norfolk and Suffolk Major Investigation Team, who instigated the initial searches as part of the investigation into the disappearance of 19 year old Luke Durbin said: "We are very much in the hands of science now to help us move this enquiry further forward.

"The identity of the bone needs to be established, which we have been advised, could take a number of weeks, if it can be conclusively identified at all.

"We have been keeping Luke’s family informed along the way of the developments and will continue to do so. This is understandably a very difficult time for them.

"I would like to thank people locally for their patience and understanding while the area is cordoned off.

"I would equally like to express my thanks to the media who have reported on this discovery and their responsible reporting.

"There is still a huge amount of work to be done to identify who the bone belongs. As I have already alluded to, historically the site was either a World War I or II barracks and also a landfill site so there may easily be an innocent explanation for the bone being in that location.”

Anyone who has any information into Luke Durbin’s disappearance or activity within the wood is asked to contact Suffolk Police on 101 or Crimestoppers on 0800 555 111.