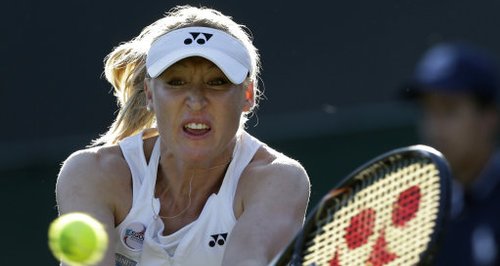 Former British number one Elena Baltacha died of liver cancer at the age of 30 early on Sunday morning, her family have announced.

Baltacha was diagnosed with the illness in January, just two months after retiring from tennis and only weeks after she married her long-time coach Nino Severino.

``We are heartbroken beyond words at the loss of our beautiful, talented and determined Bally,'' Severino said in a statement released by her family.

``She was an amazing person and she touched so many people with her inspirational spirit, her warmth and her kindness.''

Baltacha had retired from professional tennis last November after a career which had seen her ranked as the British No. 1 for 132 weeks, from December 2009 to June 2012.

Her highest singles rank was 49, which she reached in September 2010.

The Lawn Tennis Association's head of women's tennis Iain Bates said in a statement: ``Today we have lost a shining light from the heart of British tennis - a true role model, a great competitor and a wonderful friend.

``We have so many special memories to cherish, but this leaves a gaping hole for everybody in both British and women's tennis, and words simply cannot express how saddened we are by this news.

``All our thoughts are with Nino and the rest of Elena's family. We will miss you Bal.''

Baltacha had dealt with a liver condition - primary sclerosing cholangitis - diagnosed at the age of 19, throughout her career with medication and regular blood tests.

Despite the disruption it caused, she went on to win 11 singles titles, reached the third round of Wimbledon in 2002 and the same stage of the Australian Open in 2005 and 2010.

The daughter of former Ipswich, St Mirren and Inverness footballer Sergei, she represented Great Britain for 11 years in the Fed Cup and also played in the London Olympics in 2012.

However, she struggled with injury and illness during her career and ankle problems eventually forced her to retire.

After deciding to quit the professional game, she had been coaching junior tennis players at her Ipswich-based academy prior to her illness.

In a statement, the LTA said: ``Today British Tennis mourns the loss of one of our own. The news of the death of Elena Baltacha, one of the shining lights of British women's tennis of recent generations, is devastating to everyone who has ever had the privilege to know her, play against her, or call her a friend or teammate.

``It leaves a huge hole within our sport. Bally gave new meaning to the word 'fighter.' She fought tirelessly during her career against opposition on court, and never gave in to the struggles she endured off it.''

The previously announced 'Rally for Bally' - a fundraising series due to be played in June - will now go ahead in her memory.

Her childhood friend Andy Murray had committed to play in the event along with the likes of Martina Navratilova, and Tim Henman, and the money raised will go to the Elena Baltacha Academy of Tennis and the Royal Marsden Cancer Charity.