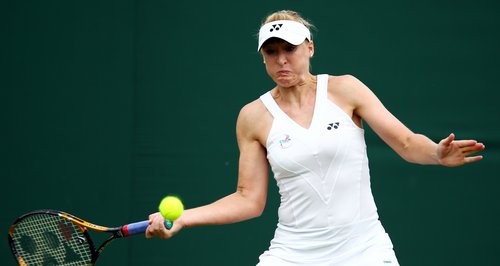 Former British No.1 Elena Baltacha is retiring from professional tennis with immediate effect.

Elena enjoyed a distinguished playing career which saw her break into the world's top 50 in 2010 and enjoy wins over top ten players including Li Na and Francesca Schiavone. She reached the third round of the Australian Open twice (in 2005 and 2010) and the third round of Wimbledon (in 2002). She also won 11 International Tennis Federation (ITF) singles titles, most recently the Aegon Trophy in Nottingham in June this year.

Elena is the highest ranked female singles player Scotland has ever produced. She also has a proud record of representing Great Britain, having played 39 Fed Cup ties in 12 consecutive years (2002-2013) and been part of Team GB at the London 2012 Olympic Games.

Elena turned 30 in August and pursued a successful career despite being diagnosed, at the age of 19, with the chronic liver condition primary sclerosing cholangitis which compromises the immune system.

"It just feels it's the right time. My body has taken such a bruising over the last 16 years and that's finally taken its toll. I have had some amazing experiences through playing tennis - some incredible highs and some very low lows - and I wouldn’t change any of them but now my mind and my body are telling me it’s time to move on to a new phase of my life.

I still absolutely love tennis and I want to take that passion and put it into learning to be the best coach I can be so that I can take all my experiences as a player and use that to help develop the next generation of British tennis players. I am very committed to my Elena Baltacha Academy of Tennis (EBAT), which I started with my coach Nino Severino. We believe that no matter what background you are from, that all children, rich or poor, should have the opportunity to play tennis. Hopefully we’ll produce a champion one day.

There are lots of people for me to thank. Firstly I want to thank all the tennis fans because they’ve been amazing to me through the years, supporting me through my success and been there through the lowest moments of my career. They have been simply brilliant.

There are also lots of people in ‘Team Bally’ who have played an important part in my career:

My coach Nino - thank you so much for believing in me when I didn’t! For picking me up off my knees and letting me lean on you when I wasn’t strong enough and teaching me how to become a true professional and a true competitor.

Judy Murray and Louis Cayer - Judy, for being such an inspirational lady. I can’t tell you how much of an honour it was to play for such a brilliant Fed Cup captain. Louis, you are simply a genius.

Everyone at the LTA - Leon Smith, Iain Bates, Jeremy Bates and all the physios and sports scientists who have always given me such brilliant support.

Everyone at AEGON for their support, and at Yonex for making me feel so special in your clothes and when playing with your rackets.

My team - Alasdair Jones, Ben Haining, Vicky Solomon, Jamie Friend, Caroline Tronson, Pete Tuffrey, Eleanor Preston, Lindsay Farish-Carradice and Anna Sheppard. Thank you for the honesty when I didn’t want to hear it, for not jumping off when it got a bit rough and for being special people.

My family - who have supported me through everything, but most importantly my Mum. Thank you for introducing me to tennis 24 years ago in our back garden in Ipswich and for sacrificing most of your life to allow me to follow my dream of one day being a professional tennis player.”