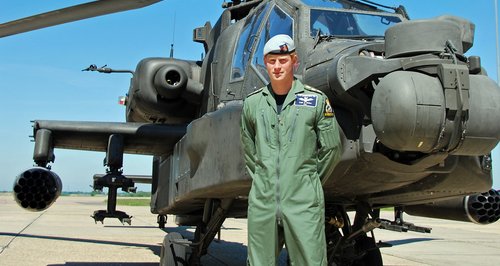 Prince Harry has qualified as an Apache Aircraft Commander following training and tests at Wattisham Airfield in Suffolk.

Lt Col Tom de la Rue also said the Prince's new status as a qualified Apache Aircraft Commander and Co-Pilot Gunner places him at the very top of his profession.

Prince Harry carried out months of training at Wattisham Airfield ahead of the assessment.

During the course of this assessment he was required to plan and deliver a comprehensive set of patrol orders, navigate throughout, fly in controlled airspace and conduct a simulated low level attack onto RAF Spadeadam as well as deal with diversions and simulated aircraft emergencies. In the process he was comprehensively tested in his ability to perform as an Aircraft Commander across a wide range of tactical and procedural scenarios.

This qualification is the culmination of his training, which has seen him over the last 3 years complete the Conversion to Type Course, which teaches students to fly the aircraft, and the Conversion to Role Course during which he was awarded the prize for the best Co-Pilot Gunner.

He also deployed to Afghanistan as a co-pilot gunner with 662 Squadron and on return to the UK has furthered his experience by flying missions day and night in the UK.