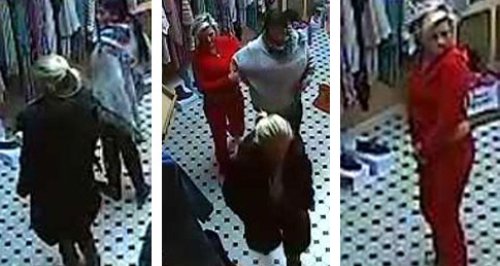 Police are putting out CCTV pictures after designer clothes were taken from a shop at Woodbridge in Suffolk.

Hundreds of pounds worth of goods were taken.

The three women, described as white and in their 20s, one wearing a pink tracksuit, one in a grey poncho and the third in a black batwing coat, entered the store in the town centre around 1.30pm on Tuesday 11 March and hid a number of items, including Versace jeans and dresses and Cavalli dresses and tops, under their clothing before leaving the shop.

Police are appealing for help in tracing the three women pictured – do you recognise them?

If you can help please contact PC Cobi Moss at Suffolk Police by dialling 101, quoting referenceWO/14/355.