CCTV Image Of Man Assaulted On A Train To Oxford 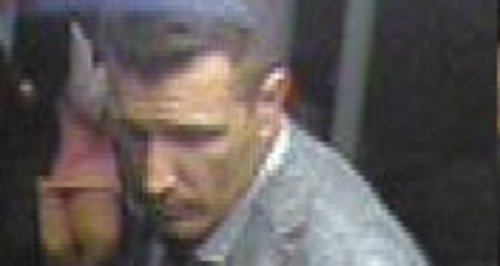 The Victim walked through the train jokingly asking passengers to show him their tickets when he was punched by another passenger.

British Transport Police launched an investigation following the incident, which happened shortly after midnight on Friday, 18 April after the victim boarded the train at Paddington station.

While the majority of people responded with good humour, one man took exception to the request, punching the victim twice in the face and breaking his glasses.

PC David McNelis, who is investigating the assault, said:

“This was a nasty attack which left the victim with cuts to his face.

“We have examined CCTV footage of the incident and are issuing images of a man we would like to speak to in connection with the assault.

“Footage from cameras at Didcot Parkway station shows the man leaving the train with a woman in a pink blouse shortly after 1.15am.

“I would ask anyone who may have witnessed the incident or who recognises the man in the pictures to contact us.

“All passengers have the right to travel without the fear of violence and we will do everything in our power to bring offenders to justice.”